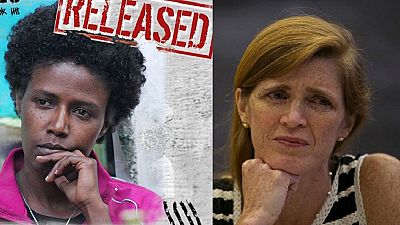 Samantha Power, the United States (US) ambassador to the United Nations (UN) has described as ‘‘encouraging news,’‘ the recent release of political prisoners by Ethiopia.

Ethiopian authorities earlier this week disclosed the release of some 9,800 people detained under the current state of emergency. Local media reports that a number of politicians and media personalities were among the released detainees.

Mrs Powers has in the past called for an end to mass arrests by the regime with the recent call for release being that of Bekele Gerba who has been held in detention by the Ethiopian authorities since 2015.

She was particularly happy about the release of the Blue Party leaders, including Blen Mesfin, a member of the opposition who was first detained in April last year.

According to humanrights.gov, Blen Mesfin was arrested along with Meron Alemayehu, and Nigist Wondifraw. The three were among a number of opposition members and others arrested and charged with inciting violence in Addis Ababa in April 2015.

A top US Department of State official who was recently in Ethiopia for meetings on human rights and governance, Tom Malinowski, also tweeted about the release of prisoners whiles expressing the hope that many more will be released soon.

All three were arrested in Addis Ababa in the days following the April 22 protests and charged with inciting violence at the rally. Alemayehu and Wondifraw were released from prison in November 2015 while Mesfin was only released in a recent mass release of over 11,000 people.