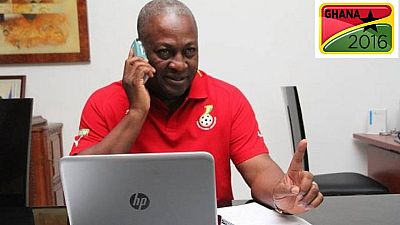 According to aides of the New Patriotic Party leader, the president called Nana Akufo-Addo and congratulated him.

Scores of people including the media are gathered at the residence of the opposition leader as he is getting ready to address the Ghanaian public.

John Dramani Mahama had earlier addressed his supporters promising to respect results to be declared by the Electoral Commission.

Ghana’s local media had declared Nana Akufo-Addo as winner of the election per their provisional figures corroborated by the opposition party’s figures.

The Electoral Commission announced Friday morning that it has results of over 200 constituencies and will declare the final results on Saturday.