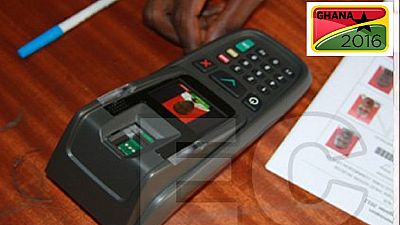 On December 7, over 15 million Ghanaians are expected to head to the polls to elect a president and some 275 members of parliament.

Ghana employs a series of processes in ensuring transparency, fairness and credibility of the polls. The main elements involved include ballot papers, biometric verification processes, use of secret ballot and transparent ballot boxes.

The ballot papers are foldable sheets of paper with three slots, the face of the candidate, their party’s symbol and a space for the thumbprint mark. They are considered the basic voting material.

But before a person is handed the ballot paper, he or she must have gone through biometric identification process, which involves placing their finger on a biometric verification device (BVD). If it fails to recognize their details, there is room for a manual process after the party officials and EC are satisfied with the processes.

A person with a stamped ballot then enters a voting booth where they are supposed to cast their ballot and fold their papers before dropping it in a transparent box set in the open.

Ghana previously used opaque boxes and with that there were reports of ballot stuffing in party strongholds especially, hence after a series of electoral reform proposals the transparent ballot boxes were adopted in 2000.

There are a total of over 28,000 voting stations dotted across the country where the electoral commission will be supervising affairs with security agencies to conduct the country’s seventh elections since the return to multi-party democracy in 1992.

Africanews presents the voting procedure and other processes after polls close and results are collated and declared.

A registered voter is expected to show up at their voting location with their voter registration card. An election official will process their documentation they will present the voter with their ballot.
The ballot contains the list of candidates running – the order of appearance is determined by the EC in an open vote before printing of ballots. A voter is expected to mark their ballot in secret behind a voting privacy screen.

The accepted means is by applying a thumbprint beside the name of the preferred candidate. The person then proceeds to drop their marked ballot in a transparent ballot box. Unmarked ballots or spoiled ones are classed as ‘rejected’ and do not go into the count.

On election day, go to the Polling Station with your Voter ID card and join the queue if any. Please don’t jump the queue

A verification officer will verify your identity as a registered voter with the biometric verification machine.

You will be issued with a Presidential Ballot paper. Please check to see if it has no marks on it. Also ensure it has the validating stamp.

Make your way to the Voting Booth and thumbprint (correctly) your choice of candidate.

Cast your vote in the Presidential Ballot Box.

Proceed to the next Polling Assistant for a Parliamentary Ballot Paper

Proceed to the Voting Booth and thumbprint (correctly) your choice of MP, Cast your ballot in the Parliamentary Voting Box.

The laws states that a person after casting their ballots should leave the Polling Station, they can return at the close of polls for the count.

Counting and collation of results

Ballot boxes, under security presence are sent to the next stage which is known as the constituency collation centers where all polling station figures are pooled together and summed. The officer in charge declares two sets of results, the presidential and parliamentary figures.

The winner of the parliamentary vote becomes the MP-elect for the constituency whiles the figures for the presidential race are sent to the regional collation centers. There, other constituencies will be added and a regional lump figure is declared.