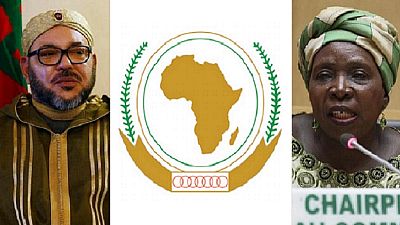 The African Union Commission (AUC) has officially denied an assertion by Morocco’s Foreign Ministry that its chairperson, Dr Nkosazana Dlamini Zuma was frustrating its attempt at readmission.

The Commission in a statement released on Monday said it was still receiving the reaction of Member States and that the country’s application was still being worked on.

‘‘Decisions regarding the admission of a Member into the African Union (AU) is the preserve of AU Member States, and not the Chairperson of the AU Commission.

Decisions regarding the admission of a Member into the African Union (AU) is the preserve of AU Member States, and not the Chairperson of the AU Commission.

‘‘Morocco’s application is, therefore, within the AU System. It is going through the internal processes and procedures of the Union, as required by the AU Constitutive Act. The Kingdom of Morocco will be further notified of the outcome,’‘ the statement read.

“The Kingdom of Morocco denounces vigorously the manoeuvres of African Union commission head, who is trying to thwart Morocco’s decision to regain its natural and legitimate place in the pan-African institutional family,” the foreign ministry said in a statement last week.

The north African country officially submitted a request to join the AU in September 2016. The application was received and officially acknowledged by the AU Commission Chairperson, H.E. Dr. Nkosazana Dlamini Zuma. Accordingly, all 54 AU Member States have been officially informed.

Morocco applied to rejoin 32 years after it left. They revoked their membership in 1984 when the AU recognized Western Sahara as an independent state, and admitted it as a member. Morocco has insisted that Western Sahara is part of its territory.

“At least 36 of the 54 AU member countries do not acknowledge the territory (Western Sahara) as a separate state and it is time to withdraw its recognition,” the Moroccan Foreign Ministry statement added.

Dlamini-Zuma, who is the outgoing head of the AU accepted to stay on in the post after heads of state failed to elect a new chairperson during the recent summit in Kigali. The AU is however in the process of heading to a special meeting in January to choose her successor among five candidates.