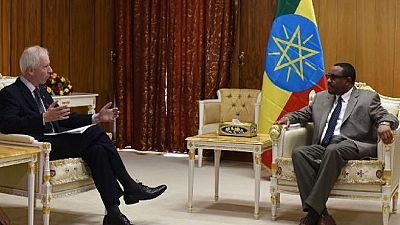 Canada has added its voice to calls for political reforms, peaceful and inclusive political dialogue in Ethiopia. The country also expressed ‘‘concerns over the deaths and violence arising from the recent unrest, particularly in the Oromia and Amhara regions.’‘

This position was contained in a statement released by the Canadian Department of Foreign Affairs, Trade and Development, after the visit of Stéphane Dion, Minister of Foreign Affairs to the horn of Africa nation that has been suffering from anti-government protests since November 2015.

‘‘Minister Dion had a meeting with Prime Minister Hailemariam Desalegn, in which they discussed the current state of emergency and the critical importance of undertaking timely and meaningful reforms for the benefit of all Ethiopians—particularly its youth—in support of the country’s growth and prosperity.

Minister Dion had a meeting with Prime Minister Hailemariam Desalegn, in which they discussed the current state of emergency and the critical importance of undertaking timely and meaningful reforms for the benefit of all Ethiopians.

‘‘The Minister also participated in an in-depth exchange with civil society representatives, highlighting the need for democratic space, pluralism and respect of fundamental freedoms for any political dialogue to be successful,’‘ the statement read.

I participated in the moving #RemembranceDay ceremonies at Canada’s embassy in #Ethiopia #RememberThem pic.twitter.com/HHPshK9Zs4

Canada noted that Ethiopia was ‘‘an important partner in the region.’‘ Ethiopia was the final stop of the Minister’s first visit to sub-Saharan Africa, he had earlier visted Nigeria and Kenya.

Before Canada, Norway had expressed similar sentiments over the restive situation in the horn of Africa region in general but more so about Ethiopia. Norway described Ethiopia as a“partner” suffering from political unrest resulting in a recently imposed state of emergency.

The Norwegian Foreign Affairs chief, Borge Brende,said there was the need for the government to quickly undertake planned political reforms, an that they will be closely following the situation in the country. A similar call was made by German Chancellor, Angela Merkel, on a recent visit.