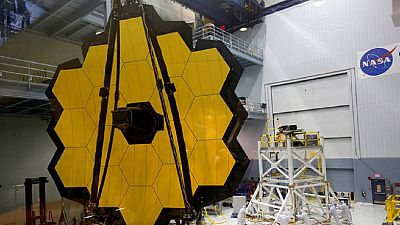 The world’s largest and most complex space telescope is finally ready after nearly two decades of construction.

Named after former NASA administrator James Webb, it will be far bigger and powerful than the Hubble Space Telescope, it is set to replace.

When it is launched into space in 2018, it will be able to peer in time, teaching us more than ever before about the origins of the universe. It will also be tasked with looking for signs of life on other planets.

Senior NASA Astrophysicist at the Observational Cosmology Laboratory, John C. Mather told a gathering: “We have done two decades of innovation and hard work and this is the result. We are opening up a whole new territory of astronomy. So we will see things that we haven’t been able to see before because this telescope is much more powerful than even the great Hubble telescope.”

The Telescope is equipped with a mirror five times larger than Hubble’s.

Powered by the Sun, the space telescope will be able to spot faint light from the very first objects that illuminated the universe and study every phase in the history of our universe following the Big Bang more than 13 billion years ago).

“We would like to know how did we get here from the Big Bang. I am hoping that we will find something that nobody knows is out there,” Mather said.

“So some little thing that happened in the early universe, that came before the galaxies, some way the black holes were formed, we don’t know where they came from. So that is a wide open topic for scientists and close to home, everything we know about planets out there has been a complete surprise. So I am expecting some more complete surprises about planets,” he added.

The Telescope’s greater power will also mean that it can see planets in greater detail, allowing scientists look for atmospheres, seasons and even weather or signs of life.

A cooperative venture between Nasa and its European and Canadian counterparts, the James Webb Space Telescope still has to go through a series of rigorous tests simulating the violent sound and vibrations it is expected to experience on its way out into space.