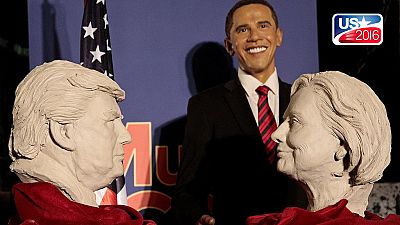 The United States goes to the polls to choose a new president after Barack Obama completes his second constitutionally mandated tenure. America’s first African American president rose to the presidency on the back of the Democratic party.

Back in 2008, Obama (then the Democratic Party’s candidate) came up against Senator John McCain who was on the ticket of the Republican party. Obama took over from a Republican president George Bush, who had also served two terms (2000 – 2008).

As part of Africanews’ coverage of the upcoming polls, we present a profile of the two main candidates in the 2016 race to the White House. This piece looks at five perspectives of each personality. Their background, academics, public service and business life, family life and social media reach.

Hillary could become the first female politician in America’s history to occupy the White House as president. Aged 69, Hillary was born on October 26, 1947 in Chicago Illinois.

Hillary in 1969 graduated with a Bachelor of Arts in political science from the Wellesley College. She proceded to the Yale Law School and in 1973, received a Juris Doctor degree from the Yale University.

These two aspects are each distinguishable with each candidate. Hillary has a public life from teaching at the University through to serving as America’s highest diplomat in the role of Secretary of State under Obama’s presidency. Whereas Trump boasts a full business life with zero public service experience.

Hillary taught as an Assistant Professor, University of Arkansas Law School in 1975. She was also an attorney at Rose Law Firm, 1976-1992.

Hillary Clinton first rose to elective office in 2001 and stepped down from an elected position in 2009. Clinton has served as an elected official for a total of 8 years, before taking an appointed office in 2009 as Secretary of State.

Author of the following books:

Hillary was in the political spotlight largely because of her husband, Bill Clinton’s politics. Bill Clinton served as governor of the state of Arkansas before ascending to the office of president, during which time Hillary was the First Lady of the United States. The couple have one daughter, Chelsea. Hillary is a Methodist by faith.

Donald Trump, born in New York City, Trump is a year older than Hillary. He was born on June 13, 1946. Trump stands the chance to be the first person with no public service record to rise to the highest office of the land.

Trump attended, Fordham University in the Bronx, New York for two years starting from August 1964. He transferred to Wharton School of Finance and Commerce at the University of Pennsylvania. He graduated with a Bachelor of Science in Economics/Real Estate.

Trump has zero record of public service but boasts a business trajectory that spans mainly from real estate ventures to other businesses. Since taking control of his father Fred Trump’s real estate and construction firm in 1971, he has expanded it by building office towers, casinos, golf courses and other facilities.

He has also been involved in the beauty pageant business having been associated with the Miss USA pageant between 1996 and 2015. He also has a media presence of appearances in films and television reality programs. Donald Trump has never held elective office.

The use of social media in this campiagn has been very poignant. Facebook and Twitter have particularly played a key role for both candidates. Going by the numbers as at today (with a day to the polls – November 7), Trump has more followers on both platforms.

So who wins the race to become the 45th president of the United States? Will Obama hand over to the man he has jabbed so much politically or his former appointee and party’s chosen candidate? The most powerful political office is up for grabs.