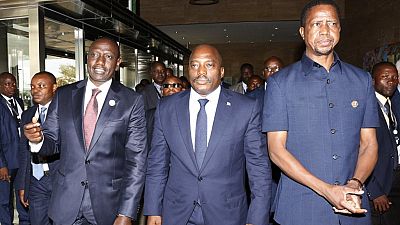 Kenya’s deputy president, William Ruto, has said that the international community must help deal with the negative forces behind the conflict in the Democratic Republic of Congo (DRC). He was of the view that the peace and stability of the DRC was hinged to that of the entire Great Lakes Region and needed to be taken seriously.

“In the age of ever-rising terrorism, the region should guard against such groups by global terror networks to perpetuate their hate agenda.

“There is need to deal with negative forces in the DRC if sustainable peace in the Great Lakes is to be achieved. We can draw lessons and best practices from each other as we strive to strengthen our democratic institutions and governance systems,” he said.

According to him, the need to deal with the rebel groups in the DRC needed to be treated with urgency before they developed into a bigger threat to the entire region. “There is an urgent need to decisively deal with such units to achieve and protect peace and stability in the region,” Ruto added.

Ruto represented president Uhuru Kenyatta at the just ended United Nations Great Lakes Peace Security and Cooperation Summit in the Angolan capital, Luanda. This was the seventh in a series of such conferences but the first ever to take place away from the African Union headquarters in Addis Ababa or the UN General Assembly.

The summit discussed ways of bringing lasting peace to the Great Lakes region, an area in sub-Saharan Africa that mainly covers about 12 countries in east, central and southern Africa, most affected by conflict. The summit was called by the UN to discuss peace programs in the DRC, Burundi, South Sudan and the Central African Republic.

Some of the rebel groups in the DRC are:

Leaders at the summit included:

Both Presidents Yoweri Museveni and Paul Kagame of Rwanda did not attend the meeting but sent representatives.