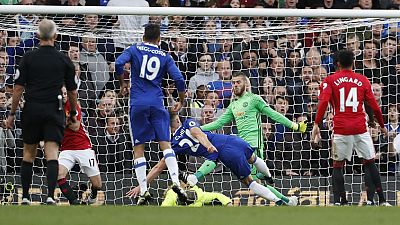 The biggest match of week 9 in the English Premier League (PL) was also the last game of the round. It pitted Chelsea against Manchester United at the Stamford Bridge.

It was a big deal partly because it was Mourinho’s first return to the grounds he twice managed in the last few years. He was last sacked by the London side over bad results in the season gone by.

Conte’s side capitalized on an array of defending errors to punish Mourinho’s side emphatically. Chelsea were quick off the mark scoring in under one minute through midfielder Pedro.

Defender Gary Cahill doubled the lead after 21 minutes before the teams went in for the first half. Conte’s team extended their lead after the restart, Eden Hazard slotting home after 62 minutes before N’Golo Kante opened his goal account with a cool finish, sending Chelsea into the top four, just a point off table-topping Manchester City.

Conte lauded his side for their spirited performance on the day, “After defeats against two great teams, Liverpool and Arsenal, it was very important to have a good answer and win against a very strong team like Man Utd.

“The most important victories in my career are when I won a title or a cup. You can win a battle, I prefer to win the war. We must continue to improve and then we’ll see.”

On the other hand Mourinho rued defensive lapses by his team in an interview with the club’s website. “If you can delete the defensive mistakes from the game I would say it was a good performance,”

“Class performance, good possession, using the ball well, creating chances, creating half chances, pushing the opposition to a defensive approach and I would say obviously a very unfair result. But we cannot delete the mistakes from the game and the first mistake happened after 30 seconds,” he added.

As it stands now there are three teams on same points at the top of the table. Arsenal’s winning run in the league was halted by a draw against Middlesborough. Manchester City’s bad patch continued with yet another draw against Southampton.

Liverpool joins Arsenal and City at the top by virtue of their win against West Brom at home. Saido Mane was on the score sheet for Klopp’s side. Chelsea and Spurs are also tied on 19 points on the fourth spot.

Another action-packed #PL weekend in the books.