Ethiopian troops pull out of key Somali military base 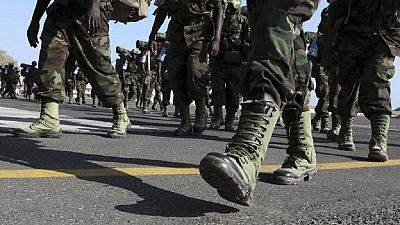 Ethiopian troops have reportedly pulled out of a key Somali base in the town of El-Ali, an influential journalist who works for the VOA in the region, Harun Maruf reports.

According to Maruf, the reason for the withdrawal is unclear even though experts believe it is connected to domestic unrest relating to the Oromo protests back home.

The Oromo protests have led to the imposition of a six-month state of emergency imposed in the restive region. The government blames anti peace forces for the disturbances.

The reason for the withdrawal of Ethiopian troops is unclear but experts believe it's connected to domestic unrest. #Oromoprotests

The journalist quotes an angry Somali military commander who accuses the Ethiopian troops of ‘surrendering’ the to al-Shabab by their latest move. Most peacekeeping troops in Somalia are under the African Union mission in Somalia (AMISOM).

But many Ethiopian troops in the Somali towns like Hiran, Bakool and Galgudud regions are not mandated by AMISOM but operate under a bilateral defense agreement between Somalia and Ethiopia.

El-Ali is a town with about 60,000 people and is the second largest base in Somalia’s Hiran region and it was vacated by Ethiopian troops within the last few weeks.