Several dead, many injured after crackdown on Oromia protest in Ethiopia 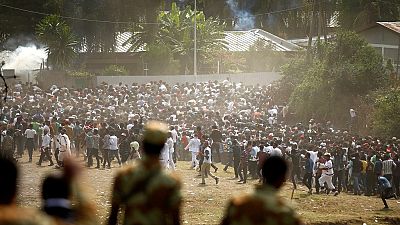 Several people have died and many injured during a stampede after Ethiopia’s special forces fired teargas and warning shots on Sunday to disperse protesters at the annual Irreecha thanksgiving festival of the Oromia people in Bishoftu.

The Ethiopian government confirmed the deaths in a statement but did not state figures while opposition groups estimate at least 50 people dead, Reuters reports.

“As a result of the chaos, lives were lost and several of the injured were taken to hospital … Those responsible will face justice,” the government communications office stated.

The chairperson of the opposition Oromo Federalist Congress, Merera Gudina, told Reuters that at least 50 people were killed during the stampede while Jawar Mohammed who is the Executive Director of the Oromia Media Network based in the United States reported about 300 dead.

The Irreecha festival is an annual thanksgiving event celebrated at the sacred grounds of Lake Harsadi in Bishoftu in the Oromia region.

Among the thousands of festival participants, a number of them marched chanting anti-government slogans and their arms crossed above their heads while Ethiopian Air Force helicopters hovered above the crowd.

Local media report that the shooting and subsequent stampede occured immediately after ruling party officials were booed off when they wanted to address the crowds at the festival.

Witnesses told Africanews that the helicopter dropped teargas on the people while the police on the ground fired the shots.

Graphic images posted on social media show people lying on the ground dead while others were being helped by the security forces.

The government disputed the figures yet hundreds remained in custody without charges after thousands of students, social media activists, and opposition party leaders and supporters were arrested.

The anti-government protests which continued in other regions including the neighbouring Amhara were held to demand fair distribution of wealth to Oromia and Amhara, which are the poorest in the country.