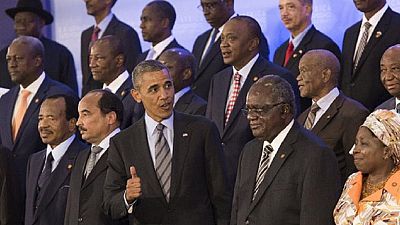 “Since Barack Obama’s rise to national and global stardom, much has been written about him from several standpoints: politics, leadership, communication, race and social media use,” notes Ghanaian scholar and journalist, Dr. Etse Sikanku in a new book about the 44th president of the United States of America.

The response and patronage to my book the #AfrocentricObama has been awesome. I'm so grateful to everyone. pic.twitter.com/4LMk0bpACJ

It is also fair to note that none of these writings have probably delved deeper into how Obama’s multiracial background, especially his African heritage impacted his persona, a theme which runs through Dr. Sikanku’s book: “The Afrocentric Obama and Lessons on successful political campaign”.

Blending storytelling with academic research, the author examines how Africa has impacted Barack Obama’s values and policy making in his eight years at the helm as leader of the ‘free world’.

For Dr. Sikanku, the timing of the book is crucial especially as Barack Obama’s days in the White House are numbered. “The time is ripe to have conversations about him (Obama), his legacy and values as well as what he represents,” he told Africanews from his book tour in the U.S.

But what does Obama represent?

“Obama stands for certain things—communalism, compromise, civility and cooperation. These are things we need in our political and governance systems in Africa. His legacy stands for something more enduring beyond dollars or financial aid,” he said.

Most of these values, Dr. Sikanku believes were borne from Obama’s ‘Africanness’. The book thus draws lessons from the Obama phenomenon that could prove useful for politics in Africa and around the world.

But beyond establishing the links between Obama’s African origins and his persona or governance, what message does the book convey?

“The message is that African leaders must inspire, work for the good of the people, not personal selfish interests and look within the continent rather than depend on external sources for development,” Dr. Sikanku told Africanews adding that “the message is for leaders to have people at the center of policy making”.

Owing to the style of writing adopted by the author, “The Afrocentric Obama” is ideal for general reading but can also serve as a vital resource communication, political science and social science students.

A U.S.-launch of the book has earned the author rave reviews.

The #AfrocentricObama is worth the read! Coming to a city near you. pic.twitter.com/3cpXzA6eve

Pulitzer prize-winning journalist and Professor Emeritus at the University of Iowa’s School of Journalism and Mass Communication, Stephen Berry said: “Dr. Etse Sikanku has produced an intriguing examination of the influence of US president Barack Hussein Obama’s African heritage and finds lessons not only for his countrymen in Ghana, but also for people in America.”

Head of the Political Science Department at the University of Ghana, Dr. Bossman Asare in his review described the book as a “master-piece that will influence people of all walks of life” adding that “this work will surely shape political campaigning globally for years”.

Jim Malewitz of the Texas Tribune probably sums up the essence of book saying: “The book offers keen insights to anyone seeking a more thorough understanding of Obama’s politics.”

Since the US release of the book, the author has held book readings and public discussions at the University of Pennsylvania, Harvard University, Iowa State University and Columbia University.

Dr. Sikanku is set to officially launch “The Afrocentric Obama and Lessons on successful political campaign” in his native Ghana on October 8 ahead of the west African nation’s crucial presidential and parliamentary elections in December.

I call it the GRAND HOME LAUNCH! Ghana; mark this date: Saturday, October 8, 2016. Do not miss it!!! #AfrocentricObama pic.twitter.com/9nfIJPLNEm

It remains to be seen if politicians aspiring for political office in Ghana would take a leaf from Dr. Sikanku’s masterpiece as the campaigns heat up for the December poll.