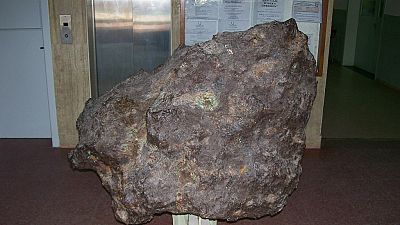 An excavating team in Argentina have unearthed a rock weighing over 30 tons it’s thought could be one of the world’s largest meteorites.

The meteorite was discovered on September 10 in the town of Gancedo, 1085km north of Buenos Aires, Argentina.

It was unearthed from an area 1,000 kilometres north of Buenos Aires that’s littered with craters and is believed to have experienced a powerful meteorite shower more than 4,000 years ago.

It was in Campo del Cielo, where a shower of metallic meteorites fell around 4,000 years ago.

Scientists are to carry out more tests to determine the rock’s origins.
The same area of Argentina is home to another giant meteorite known as El Chaco. Weighing 37 tons, it was discovered in 1969.

Astronomers say they were surprised by the latest discovery’s size and weight.
The readings need to be confirmed, but scientists are confident: an 100 estimated tons of space debris have been excavated from the site so far.

“It was in Campo del Cielo, where a shower of metallic meteorites fell around 4,000 years ago,” the team told a local media.

The worlds discovered largest meteor called Hoba weighs more than 60 tonnes and was found in Namibia nearly a century ago by a farmer while ploughing in his field.