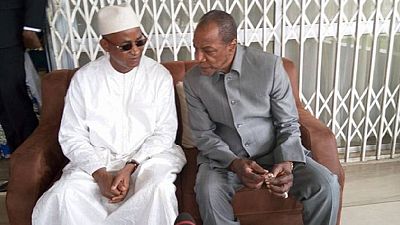 <p>For the second time in a week, the two biggest political figures in Guinea, president Alpha Conde and opposition leader Cellou Dalein Toure, have met in a cordial atmosphere.</p> <p>The latest meeting was during a condolence visit by the president to the home of Diallo. The opposition chief’s big brother died on Wednesday in Senegalese capital, Dakar. The move is seen as significant in peace efforts because of the recent history of tension between the two men.</p> <p>“We die once, even if it’s your enemy who faces death, you must submit condolences. Cellou is a brother. Although there is politics, we are all brothers, as Guineans …” Conde remarked.</p> <p>The president was accompanied by Sanoussy Bantama Sow, a minister who recently accused Cellou Dalein of plotting a coup. Additionally Alpha Conde donated 50 million Guinean francs (about 5000 euros) for the “price of the shroud” used to bury the deceased.</p> <p>Despite the loss, both men managed to share light moments. A situation that some months back was unthinkable.</p> <p>During their first meeting at the presidency, the two men pledged their commitment to foster “regular exchanges” two weeks after opposition violent demonstration.</p> <p>The meeting was also perhaps in effort to thaw soured relations. Conde said the meeting had covered “many points” and that the two would now meet regularly because they both want whats best for its citizens.</p> <p>“He was a minister, prime minister, so he has some experience in the management of our country. He has very interesting views. And even when I have to travel, I listen to what he thinks of our relations with any country,” he said.</p>