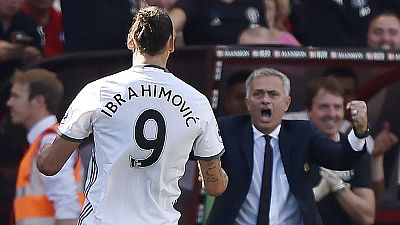 Manchester United striker and ex skipper of Sweden, Zlatan Ibrahimovic, is in line to equal a 91-year-old goal scoring record at the club after joining the Old Trafford side barely two months ago, the club has said.

Only one player in the club’s history has scored in four competitive consecutive matches right from their debut for the club. Ibrahimovich will be chasing the record set by Jimmy Hanson in 1924/25 & 1925/26 football season. To attain that, he must score away during week three of the Premier League when United visit Hull City.

He has already joined a prestigious list of the club’s players who have scored in their first three games for the club. Ian Storey-Moore in 1971/72 season was the eighth player to achieve a feat that Ibrahimovic has now attained.

So history beckons for Ibrahimovic this weekend, if the Swedish number nine can breach the Tigers' defence at the KCOM Stadium and rewrite the record books. Good luck, Zlatan!

On 7 August 2016, Ibrahimovic was on target getting the match-winning goal for United in the 2016 FA Community Shield, his header past Leicester City goalkeeper Kasper Schmeichel in a 2–1 victory won Mourinho his first silverware of his time at United.

On his Premier League debut a week later, he scored with a long-range strike in the 3–1 away win at Bournemouth.

In week two fixtures in the PL, on 20 August, Ibrahimovic scored both goals as Jose Mourinho’s side claimed a second straight PL victory. He scored a header in the first half and a penalty in the second, to beat Southampton 2–0 at Old Trafford.

The Swede joined Man United on 1 July 2016. He signed as a free agent from French side Paris Saint Germain on a one-year contract, which had the option of being extended depending on his performance for the club.

“So history beckons for Ibrahimovic this weekend, if the Swedish number nine can breach the Tigers’ defence at the KCOM Stadium and rewrite the record books. Good luck, Zlatan!,” the club stated.