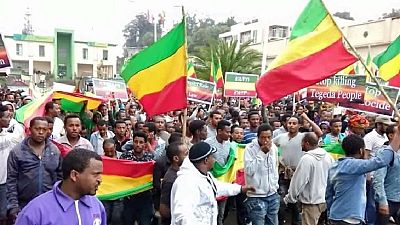 <p><em>The protests in Ethiopia last weekend follow previous incidents of discontent by another dominant ethnic group: here we look at the background to the unrest:</em></p> <p>Earlier this year, members of the country’s largest ethnic group, the Oromo, took the the streets in violent demonstrations. </p> <p>Now it is the second biggest group, the Amhara, who are protesting.</p> <p>Many thousands gathered on <a href="http://www.africanews.com/2016/07/31/half-a-million-protesters-call-for-a-regime-change-in-ethiopia/" target="_blank">Sunday to protest</a> governance issues.</p> <p>The protest does not have a single cause but a clear target was the federal government, dominated by the Tigray minority ethnic group since the last military ruler Mengistu Haile Mariam was deposed, as far back as in 1991.</p> <p>Africanews’ correspondent in Ethiopia, Antoine Gilando, confirmed the reasons for the protest on <a href="http://www.africanews.com/2016/08/01/protests-in-ethiopia-the-morning-call/" target="_blank">‘The Morning Call’</a> program explaining further that even with their ties to a relatively smaller population, the ruling Tigray People’s Liberation Front (<span class="caps">TPLF</span>) had established a hegemony at the helm of the political establishment.</p> <p>Getachew Metaferia, professor of political science at Morgan State University in Maryland, US, told <a href="http://www.voanews.com/content/protests-ethiopia-gonder-city-signal-uncertain-future/3445262.html">Voice of America</a> that growing inequality and a lack of freedom of expression had combined with perceived attempts to favour Tigray in the position or regional boundaries to spark the protests.</p> <p><strong>At the heart of the current protest</strong></p> <p>Local media report that the Welkait community, a group administered by the far north Tigray region had requested since a year ago to be realigned politically with the neighbouring Amhara region.</p> <p>The community’s representatives under the banner of the ‘Welkait Amhara Identity Committee’ said they did not want to be ruled by Tigray and the reason for opting for Amhara was because they identified themselves as ethnic Amharas.</p> <p>Tensions had been rising for two weeks before culminating in last Sunday’s protest sparked by social media activism. Huge crowds thronged the streets of Gondar in peaceful protest over boundary positioning but also decrying issues of human rights.</p> <p>Regional authorities put the numbers of demonstrators at 8,000, compared with 30,000 cited by protest leaders, <a href="http://www.bloomberg.com/news/articles/2016-08-01/protest-in-northern-ethiopian-region-signals-mounting-discontent">according to Bloomberg</a></p> <p>Voice of America cited Amhara Regional State government communications office spokesman Ngusu Tlahun as saying the issues about development and good governance would be addressed.</p> <p>The Tigray group according to the Central Intelligence Agency (<span class="caps">CIA</span>) estimates of 2007, are the fourth largest ethnic group (6.1% of the population) behind the Oromo, Amhara and Somali which account for 34.4%, 27% and 6.2% respectively.</p> <p>Since the current government came to power in 1991, it has introduced a federal governance structure with regional states based around ethnicity and language groups. </p> <p>Before last Sunday’s Gondar protests, Ethiopia had made global news headlines for two reasons.</p> <p>The country nestled in the Horn of Africa region had won a seat as a non permanent member of the United Nations Security Council in June, the country also hosted the Israeli prime minister Benjamin Netanyahu on his African tour in early July this year.</p> <p>These were two diplomatic highs for the country but have not masked internal discord.</p> <p>The government in February 2016 dismissed claims by rights group Human Rights Watch (<span class="caps">HRW</span>) that it violently suppressed the protests in the Oromia region. It has in the past accused neighbouring Eritrea, with which it is locked in a bloody war, of backing protests in order to perpetrate acts of terrorism.</p>