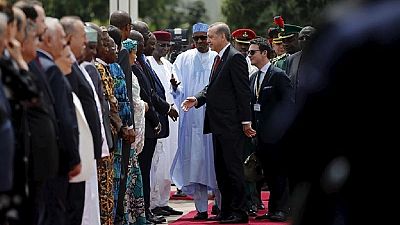 Turkey has turned to Africa’s most populous nation, Nigeria, in its continued crackdown on all elements linked to the failed coup of July 15.

Local media sources in Nigeria report that the Turkish ambassador to the country, Hakan Cakil, has requested the Federal government to close down 17 schools that have links to the alleged mastermind of the failed overthrow, United States based Fetullah Gulen.

“In Nigeria, there are 17 schools, which belong to the Gulen Movement, one in Kano, one in Kaduna, one in Abuja, Lagos etc and they are offering scholarships. We are starting some legal procedures to take the name of Turkey out of the name of the schools. They are not the schools of the Turkish government,’‘ Cakil is reported by Vanguard online portal to have said.

We are requesting the Nigerian Government to close down the schools. I have requested officially, both orally and in writing, the closure of these schools.

The ambassador made the call when he met with vice chairman of Nigeria’s senate foreign affairs committee, Senator Shehu Sani. The ambassador emphasized that his country had nothing to do with the said schools.

He further disclosed that plans were far advanced at the federal government level to ensure that Turkey’s request is affirmed. “We are requesting the Nigerian Government to close down the schools. I have requested officially, both orally and in writing, the closure of these schools,’‘ he added.

The Erdogan led government meanwhile continues its massive purge in several areas of its society back home in light of the recently failed coup attempt which the government insists was led by Gulen, even though he has repeatedly denied the accusations.

The ‘African purge’ of Turkey’s coup plotters started in Somalia where the government ordered all charities linked to Gulen to leave the country. The Turkish government has said that it would take over operations of all the abandoned charities which include educational institutions and medical facilities.

Draped with Somali and Turkish flags and portraits of the Turkish president Recep Tayyip Erdogan as well as the Somali leader, Hassan Sheikh Mohamud, the protesters marched through the city and gathered near the Turkish embassy, where they declared their support for the embattled Turkish government.