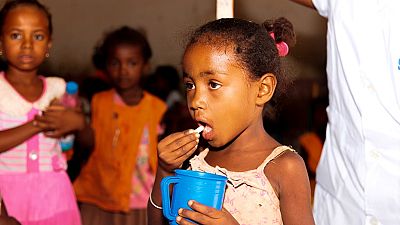 <p>Ethiopia has received some 14 million tablets meant to eliminate a worm disease that is endemic in the country. The praziquantel tablets, a treatment for schistosomiasis are for mass distribution to school children. </p> <p>According to the World Health Organization (<span class="caps">WHO</span>), Ethiopia is one of the most endemic countries for schistosomiasis worldwide and the delivery of the tablets in the capital Addis Ababa is the largest consignment ever. </p> <p>It was made possible by Merck, a leading science and technology company, who are partnering the <span class="caps">WHO</span> in the fight against the worm disease in Africa. </p> <p>“We want to contribute to eliminating the insidious worm disease in order to help infected children to take part in the economic development of their home countries. With our donation of approximately 14 million tablets to <span class="caps">WHO</span> for Ethiopia, approximately six million school children can be treated – covering half of the country’s school-aged population in need of treatment,’‘ said Chokri Ahmadi, General Manager of Merck for Ethiopia, Sudan and the French-speaking countries in Sub-Saharan Africa.</p> <p>It is estimated that around 23% of Ethiopians (23 million people) require treatment for the disease. The country has been participating in the Merck Praziquantel Donation Program since 2012 and has received around 43 million tablets to date.</p> <p>‘‘This shows that we are on the right track. However, we know that we alone cannot solve the problem with our tablets,” the Merck boss added.</p> <p>Since 2007, more than 74 million school children, have been treated. To this end, Merck has donated over 340 million praziquantel tablets to the <span class="caps">WHO</span>. The drug (praziquantel) is well tolerated and the most effective treatment to date for schistosomiasis. </p> <p>The drug producer is also supporting educational and awareness programs in Africa, developing schistosomiasis therapies for very young children and cooperating with partners in the Global Schistosomiasis Alliance.</p>