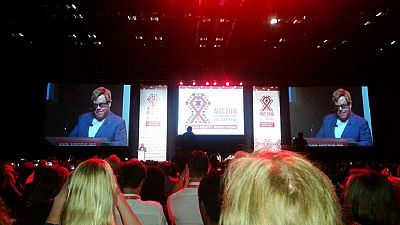 The progress and advances made in the research against the AIDS pandemic is the epicentre of this year international AIDS conference underway in South Africa.

The two spoke about the work of the foundations they founded to tackle the disease.

We can turn this promise of an AIDS free world from an aspiration into a reality.

“If you give people love and compassion and you include them like LGBT people, like intravenous drugs users, like sex workers, like transgender people. You don’t leave them behind, you leave no one behind in the human race, you include them all. If you don’t, this campaign to end AIDS will be a disaster,” said Elton John.

The conference began on July 18th and will end on the 22nd.

It is aimed at improving the fight against HIV and AIDS. The UN has set a target of ending the AIDS pandemic by 2030.