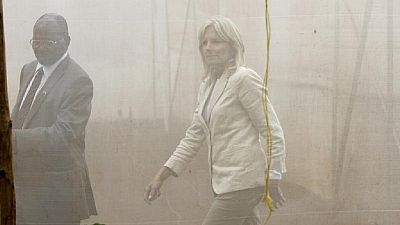 Authorities at Malawi’s Chancellor College, have closed down the institution with immediate effect following illegal demonstrations by students of the college. The students were subsequently asked to vacate the premises.

Local media report that the college was closed after students obstructed the convoy of the Second Lady of the United States, Dr. Jill Biden, who is on a visit to the country.

In a terse memo addressed to all staff and students of the school, the principal, Prof. Richard Tambulasi said, ‘‘… due to the current illegal demonstrations by students and subsequent security threats, the College has been closed with immediate effect.’‘

Due to the current illegal demonstrations by students and subsequent security threats, the College has been closed with immediate effect.

Students of the college, which is part of the University of Malawi (Unima) in Zomba, on Tuesday blocked Dr. Biden’s motorcade in Matawale, Zomba during anti-fee hike demonstrations.

The students burnt tyres and mounted road blocks making it impossible for Biden’s motorcade to proceed on official duty to Machinga.

Africanews’ correspondent reports that Biden, who was accompanied by the US Ambassador to Malawi, Virginia Palmer and the country’s Minister of Education, Emmanuel Fabiano, were taken to the Eastern Region police headquarters at Zomba ‘Zero’ before returning to Blantyre, the commercial capital about 62km from the former capital city.

The incident is seen as a diplomatic embarrassment for Malawi. President of the University of Malawi Students Union (Umsu) Tionge Sikwese said they the demonstrations were to force the university council to reverse the fee hike.

Police had earlier arrested 11 students in relation to the incidents. Dr. Jill Biden, wife to United States Vice President, Joe Biden, arrived in Malawi on July 18 at the start of a three-nation African tour.

According to a statement from the US Embassy in Lilongwe, Biden and US Ambassador-at-large for Global Women’s issues, Catherine Russell, will engage the government and civil society partners on issues related to economic empowerment and educational opportunity for women and girls during her visit.