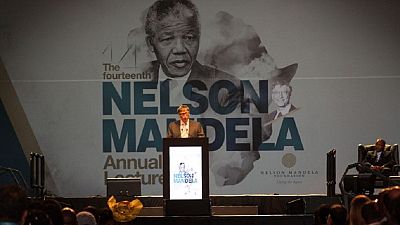 The world’s richest man and Chief Executive Officer of Microsoft, Bill Gates, has stated that the kind of fair and just world that former South African leader, Nelson Mandela, dreamed about is still achievable.

Gates, over the weekend delivered the 14th Nelson Mandela Annual Lectures at the University of Pretoria’s Mamelodi campus. The 2016 lecture was under the theme, ‘Living Together.’

According to him, the future Mandela dreamt of was one of prosperity and unity and that the system Mandela fought against, Apartheid and white domination was one that proposed the opposite.

Today, South Africans are still striving to ‘live together’ in the fullest sense, but you are so much closer to that ideal because Nelson Mandela and so many others believed in the promise of one South Africa.

“Today, South Africans are still striving to ‘live together’ in the fullest sense, but you are so much closer to that ideal because Nelson Mandela and so many others believed in the promise of one South Africa,” Gates said.

In answering these questions through his lecture, the philanthropist bemoaned the high rate of inequality in Africa as compared to other continents. He said, “Gross inequalities exist both within countries and between countries. Until progress belongs to all people, everywhere, the real promise of living together will remain elusive.”

Gates further emphasized the need to turn attention to the youth because Mandela was a man who believed in harnessing the power of young minds.

“I agree with Mandela about young people, and that is one reason I am optimistic about the future of this continent. Demographically, Africa is the world’s youngest continent, and its youth can be the source of a special dynamism,” he noted.

He also outlined some plans the Bill and Melinda Gates Foundation had in respect of tackling inequality on the continent. He revealed that the Foundation would increase their investment in the area of education, health and innovation with focus on youth.

He added that Africa could achieve the future it aspired to, but that future he said, depends on people of Africa working together across economic,social stratification and across national borders in order to give the youth the opportunities they deserve.

“It’s clear to everyone how big and complicated the challenges are. But it’s just as clear that people with bravery, energy, intellect, passion, and stamina can face big, complicated challenges and overcome them.

‘‘There is so much more work to be done to create a future in which we can all live together. But there are also so many people who are eager to get to work. Let’s do everything within our power right now to help them build the future that Nelson Mandela dreamed of – and the future that we will achieve together,” he concluded.