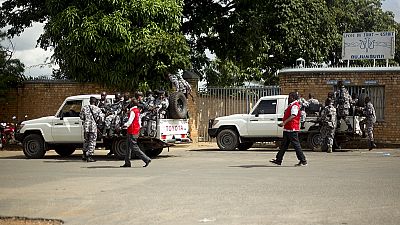 The United Nations Security Council is considering sending up to 228 U.N. police to Burundi to monitor the security and human rights situation in the country.

France circulated a draft resolution to the 15-member council on Friday, that would deploy police for one year and ask U.N. Secretary-General Ban Ki-moon to report on grave security incidents or human rights abuses.

Burundi’s U.N. ambassador, Albert Shingiro, said on Friday his country would only accept up to 50 unarmed U.N. police, adding that “the sovereignty of Burundi must be fully respected.”

More than 450 people have been killed since President Pierre Nkurunziza pursued and won a third term last year, a move that his opponents say violated the constitution and a peace deal that ended a civil war in 2005.

Government officials and members of the opposition have been among those killed in tit-for-tat violence.

The violence in Burundi has caused alarm in a region where memories of Rwanda’s 1994 genocide remain raw.

So far the violence has largely followed political rather than ethnic lines. But the United Nations High Commissioner for Human Rights said last month he feared increased violence and incitement could turn ethnic in nature.

The draft resolution “strongly urges the government of Burundi and all parties to cease and reject any kind of violence and condemn any public statement inciting violence or hatred.”

In response to a council request, Ban gave the council three options for a possible police deployment in a report in April: a light footprint of 20 to 50 police personnel to assess the Burundi police, a monitoring presence of 228 police, or a protection and monitoring deployment of some 3,000 police.

About a quarter of million people have fled the violence in Burundi.