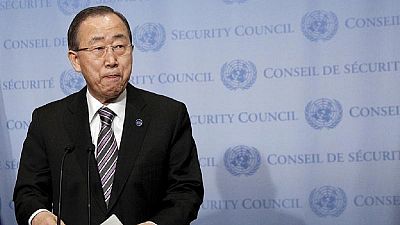 The United Nations Secretary General, Ban Ki-moon, has stated that South Sudanese leaders have failed their people in the wake of renewed fighting that is threatening to derail the August 2015 peace deal.

“Yet again, the leaders of South Sudan have failed their people,” Ban said. “What kind of leadership is it that resorts to deadly weapons and identity politics, time and again? Failed leadership.”

Ban said he would meet with the 15-member Security Council on Tuesday to discuss the situation in South Sudan.

Yet again, the leaders of South Sudan have failed their people. What kind of leadership is it that resorts to deadly weapons and identity politics, time and again? Failed leadership.

Ahead of the meeting, he has urged the United Nations Security Council to impose an arms embargo on the country. He also pushed for targeted sanctioned to commanders who were blocking the implementation of the peace deal.

“We desperately need attack helicopters and other material to fulfill our mandate to protect civilians,” Ban said.

“I also urge all countries contributing to (the U.N. mission) UNMISS to stand their ground. Any withdrawals would send precisely the wrong signal, in South Sudan and across the world,” he further stressed.

Kiir and Machar have long been rivals in politics and on the battlefield. A civil war that began in December 2013 came a few months after Kiir dismissed Machar as his deputy. The pair signed a peace deal in August 2015, but implementation has been slow.

US involved in ‘ordered departure’ of staff

Despite welcoming the ceasefire calls by South Sudan President Salva Kiir and his First Vice President Riek Macharr, the United States State Department said on Monday that it was implementing an ‘ordered departure’ of its staff from the country.

The latest action comes in the wake of heavy fighting between troops loyal to President Kiir and Machar. Hostilities between troops on both sides started late last week leading to over 200 deaths and fears that ther could be a return to a civil war.

According to the State Department’s spokesperson, John Kirby, even though Washington welcomed the ceasefire, the ‘ordered depature’ it was carrying out did not amount to an evacuation exercise.

The United States, Britain, France, Angola and other members of the Security Council pushed for an arms embargo on South Sudan earlier this year. But veto power Russia said it was opposed to such a move because it did not believe it would be helpful to implementation of the peace deal.