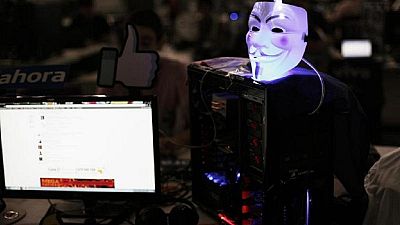 Anonymous Africa have announced that they are behind the downing of three major Zimbabwean websites.

The official government website, that of the ruling ZANU PF party and the state broadcaster, Zimbabwe Broadcasting Corporation, have been down since Wednesday and remain inaccessible on Thursday.

A statement released by the hackers read, ‘‘We have started operations against the Mugabe dictatorship in an attempt to support the people of Zimbabwe and their stay away protests that you can read on Twitter with the hashtag #ShutZimbabweDown or #ShutZimbabweDown2016.’‘

We have started operations against the Mugabe dictatorship in an attempt to support the people of Zimbabwe and their stay away protests.

The operation was in reaction to the government’s shut down of whatsapp on Wednesday following a general social shutdown which was aggravated by striking workers protesting lack of payment of their salaries.

The unrest in the southern African country began last Friday with online activists calling for a shutdown in the face of mounting challenges the country was facing due to the shortage of food resources and a crippling economy.

Anti-corruption protests by drivers in the capital Harare also turned violent on Monday as the drivers hurled stones at police and blocked streets with burning tyres and stones. The police in turn fired tear gas and water canon amid a heavy physical clampdown.

The government meanwhile has denied having a hand in the whatsapp hitch of Wednesday, according to Information, Communication Technology minister, Supa Mandiwanzira, ‘‘instead of people coming up with all these falsehoods that government has interfered with over the top services, they should give us credit for refusing the insistence by operators to ban over the top services.’‘

According to the minister, the government had received persistent calls by mobile operators in the country asking to ban over-the-top services like whatstapp, skype, viber and others that were eating into their revenues.