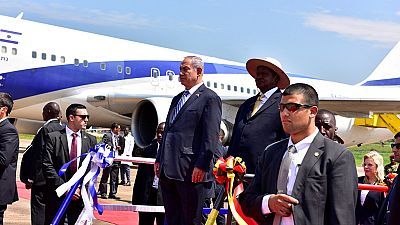 Ugandan president, Yoweri Museveni, has waded into Middle East politics asserting that Jews and Arabs need to agree on how to live together in peace in two independent states. (i.e. Israel and Palestine)

Museveni’s comments were at a ceremony after the much anticipated arrival of the Israeli Prime Minister, Benjamin Netanyahu, on the first stop of his historic African tour that would see him visit Kenya, Rwanda and Ethiopia later.

Netanyahu landed at Entebbe airport for the half day visit to commemorate the 40th anniversary of his government’s raid on the same airport on the same date in 1976. He landed at exactly 1.40pm, local media sources reported.

Landed in Africa. It's been decades since an Israeli PM has visited. I'll be in Uganda, Kenya, Rwanda & Ethiopia.

Present to receive him were President Museveni and several government dignitaries, the Jewish community in Uganda, Ugandan security and members of the diplomatic corp, among others.

His official twitter handle tweeted a message upon landing “Landed in Africa. It’s been decades since an Israeli PM has visited. I’ll be in Uganda, Kenya, Rwanda & Ethiopia.”

Landed in Africa. It's been decades since an Israeli PM has visited. I'll be in Uganda, Kenya, Rwanda & Ethiopia. pic.twitter.com/0HOAh3fhgs

The event was a solemn one for the Israeli premier who visited and laid a wreath at a site where his elder brother Yoni Netanyahu was killed during a rescue mission to free Israelis who were held hostage on a flight.

Museveni expressed happiness that the sad event of 40 years ago, had developed into something positive, that is; a historic visit by an Israeli leader to Africa, the first in decades.

On his part, Netanyahu expressed joy at being able to visit Africa, after thanking Museveni for his hospitality, Netanyahu lauded Uganda for agreeing to host a regional summit on anti-terrorism.

He is expected to be hosted to a State dinner after the anti terrorism meeting, following which he would depart for Kenya, the second stop on his African tour.