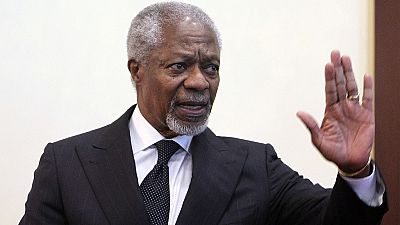 “If political rivals and their supporters do not believe the electoral process to be free and fair, then they will ultimately resort to less peaceful methods to change political direction,” he warned.

The Nobel Peace Prize Laureate made the statement on Thursday, June 23, 2016 in a speech delivered at an annual lecture organised by the Ghana Center for Democratic Development in Accra under the theme: Credible and Peaceful Elections: A Prerequisite for Africa’s Progress.

If political rivals and their supporters do not believe the electoral process to be free and fair, then they will ultimately resort to less peaceful methods to change political direction.

“Regimes have developed a multitude of methods, some more subtle than others, to ensure that level playing fields are limited to sports competitions only. This may work in the short run, but it is a dangerous strategy in the long run, for democracies without credible elections are no democracies at all,” he said.

Kofi Annan highlighted the role of elections and then five challenges that must be overcome to ensure them including strengthening the rule of law, professional and independent election bodies, stronger institutions, political equality and prevention of vote buying and bribery of candidates.

He maintained that elections are mechanisms for the arbitration of political rivalries, and peaceful and democratic rotation of leadership, ruling out authoritative leadership as a solution to Africa’s problems which he believes “can be a slippery slope towards authoritarian leadership”.

“When you entrust all power to one person, and he or she proves not to be as enlightened as you had hoped, can you hold that leader to account, or get him/her out of office?” he questioned and then quotes Lord Acton: “Power corrupts. Absolute power corrupts absolutely”.

“Many of our own African leaders are tempted to revert to the bad old ways of Big Man rule. So let me be very clear about this: democracy is crucial for Africa’s progress,” he added.

Kofi Annan said Africa has come a long way and democracy is not fully achieved but always a work in progress. He advised the youth to work towards deepening and sustaining democracy so as to live as free men and women.

As the AU mediator in Kenya’s post-election crisis of 2007-08, Mr Annan on Tuesday accused the Kenyan government of using state resources to undermine the ICC during the case related to violence after the disputed elections in 2007.

He also praised the recent conviction of Hissene Habre, the former president of Chad, who was tried and sentenced to life in prison for war crimes and crimes against humanity during his rule.