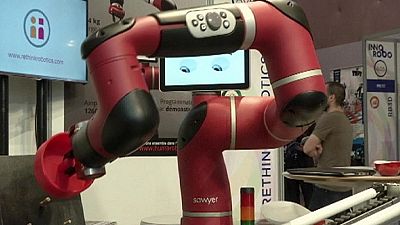 As robotics technology gets faster, smarter and more interactive, many wonder how useful robots can be?

At the recent Innorobo robotics event in Paris, “cobots” – meaning collaborative robots – were a major source of attraction as they executed various tasks hitherto considered too complex to automate.

“Sawyer” a robot made up of a screen and robotic arms can autonomously sort out red plastic discs.

The new, so-called high-performance “cobot”, is designed to do machine tending, circuit board testing and other precise tasks previously thought impractical to automate.

There is an inbuilt camera which allows Sawyer to re-orientate itself to deal with some real-world conditions, according to its developers.

“I think the future for cobots will be a way to have cobots more and more efficient, more and more easy to programme. The idea is not to have a single robot in a single place for many months, but to have a robot doing many tasks in just one day,” said Jerome Laplace, CEO of Humarobotics.

The new generation of robots being designed can also help humans carry out strenuous tasks.

“Exo Push” is one of such robots.

Developed by Paris-based RB 3D, the industrial exoskeleton (Exo Push) is equipped with a set of straps and a hand sensor.

It is designed to multiply a worker’s strength while carrying out rigorous industrial tasks.

“One guy (road worker) can have to spread like 35 tonnes per day, this is awful yeah? So with this machine we multiply your strength by ten, so the guy sees only 3.5 tonnes, which is very good for him. So at the end of the day, he’s less tired and he’s able to do more work, all-day long,” said Olivier Baudet, Business Development Manager for RB 3D

On display was yet another prototype robot designed to assist people living with disabilities.

A Canadian firm, Kinova has developed a robotic arm called “Jaco 3 Fingers” with the aim of assisting persons with disability especially those using power wheelchairs.

The robotic arm is said to be able to carry out simple tasks without the help of a care giver.

Francois Boucher, Vice President of Kinova Robotics’ Business department explained thus: “Imagine that you’re stuck in a power wheelchair so you can just slightly move your arms or don’t move your arms at all and then suddenly with the arm, you can eat by yourself, drink by yourself, instead of having a caregiver that is going at your home to feed you.”

The most interesting of the robots on display was one designed by Ethan Woods which he calls the “Grillbot”.

It is said to be the world’s first automatic grill-cleaning robot.

Fixed with nylon brushes, Grillbot is a fully-automated device driven by a central processing unit which controls the movement, speed and direction of its brushes.

All the owner has to do is to push a button and watch the tiny robot busily scrape away grease and grime.

It is also fitted with an LCD alarm and timer which means the owner can set the robot to work and forget about it. Grillbot will notify the owner when the work is done.

“I was having company over, I was getting the grill ready, I open it up, it was a dirty greasy mess and my brush was broken. All the bristles were smashed in, it wouldn’t work. So instead of going back into to town to buy a new brush, I went into my garage and got my power drill, I attached a brush to it, I started cleaning the grill with the power drill and I thought to myself: ‘Why can’t you just push a button? Why do I have to stand here over this hot grill and do this?” Ethan said of how he got the idea to develop Grillbot

Flexible, useful, high performance cobots and robots in the workplace is every developers dream.

But critics say it will bring mass unemployment and a new era of social inequality.