New counter-offensive by Libyan forces repels IS in Sirte 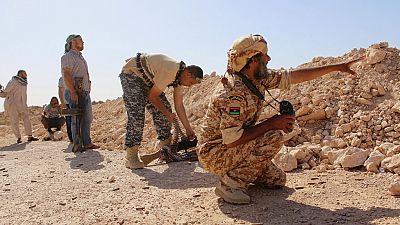 Libyan pro-government forces have launched new counter-offensive attacks against the Islamic State (IS) on Wednesday repelling the jihadist group in its stronghold in Sirte where it has been surrounded.

The IS tried to break the positions controlled by the Libyan National Unity Government militias in the western sector of the city located 450 km east of Tripoli, a large area reclaimed on June 9.

The jihadists used a tank, mortars and snipers, pro-government forces who claimed to have foiled the attack said in a statement adding that their progress in Sirte is opening a new front.

“Our forces fired heavy artillery against areas located around the Ouagadougou conference center,” their statement added making reference to the complex where the jihadists have set up their command center since they took control of the city in June 2015.

Since the launch of counter-offensive attacks on May 12 against IS in Sirte, 145 militia of the pro-government forces have died and more than 500 were wounded, according to medical sources.

On Tuesday, the head of the fragile unity government in Libya, Fayez al-Sarraj, again called for the unity of Libyans to form a common front against the IS.

His call was again dismissed by rival authorities, based in the east and controlling the Cyrenaica, one of two major populated areas of the country, who refuse to recognize the unity government’s legitimacy and power.

Mr. Sarraj is strongly supported by the UN, including the Security Council which on Tuesday voted unanimously on a resolution authorizing the European naval operation off the Libyan coast to monitor the arms embargo imposed since 2011, to help the Libyan unity government in its fight against the jihadists.