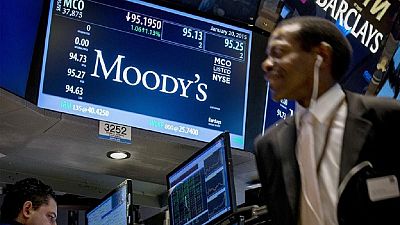 The agency cited deteriorating operating conditions over the next 18 months for the downgrade from stable to negative.

According the annual banking system outlook “the outlook expresses Moody’s expectation of how bank creditworthiness will evolve in this system over the next 12 to 18 months”.

The outlook expresses Moody's expectation of how bank creditworthiness will evolve in this system over the next 12 to 18 months.

South Africa’s economy, weakened by low commodity prices, drought and political disturbances, is expected to grow by less than 1 percent this year.

Moody’s earlier this month maintained the sovereign rating of Africa’s most advanced economy at BAA2 with a negative outlook, two steps above junk.

Moody’s said it expected the banking system’s non-performing loan ratio to rise to around 4 percent by the end of 2017 from 3.1 percent in December 2015 due to pressure on corporate firms and consumers stemming from rising interest rates and inflation.

The ratings agency also indicated that profitability in the banking sector could come under strain due to a decline in demand for credit and lower business opportunities.

Meanwhile Fitch, another international ratings agency on Thursday cautioned South African authorities against adopting populist measures such as introducing a minimum wage in the run up to local elections in August.

The government is said to be considering the implementation of a national minimum wage but has not set a date for its introduction.

Fitch’s head for Europe, Middle East and Africa sovereign ratings, Jan Friederich is quoted by South African broadcaster, SABC as telling a banking conference that: “The authorities may see a need to react to the discontent about insufficient improvement to living standards by pushing costly social programmes.”

Fitch which rates South Africa one notch above speculative grade is expected to review the country’s rating next month.

Standards and Poor’s has also rated South Africa’s debt at BBB-, one notch above speculative grade.