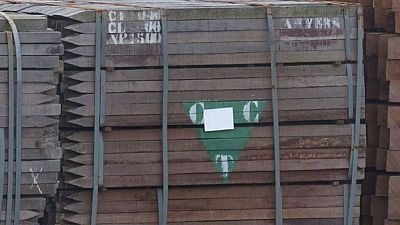 A forest campaigner with Greenpeace Africa, has stated that Cameroon must team up with the European Union if the country is keen on combating the incidence of illegal logging and timber export.

”If Cameroon is serious about ending the illegal timber trade, it must work closely with the EU towards credible implementation of the Voluntary Partnership Agreement and, as a first priority, re-establish a system of credible Independent Monitoring of Forest Law Enforcement, Governance and Trade,” Ini posited.

The group disclosed that its investigation of logging companies had been presented to Cameroon’s main log exporter, Compagnie de Commerce et de Transport (CCT) who responded to Greenpeace’s report on their suppliers, stating that their ongoing audit would address the issues of raised.

If Cameroon is serious about ending the illegal timber trade, it must work closely with the EU towards credible implementation of the Voluntary Partnership Agreement.

Eric Ini said about CCT’s audit: “Greenpeace Africa takes note of the audit of CCT’s practices – but stresses that this process should be independent and transparent, and that CCT suppliers are properly sanctioned when illegal activities are confirmed.”

The group specifically mentioned logging company, La Socamba, which it asserted must be included in a Cameroonian government audit of illegally-sourced timber destined for worldwide markets.

They bemoaned how European countries especially the Netherlands, had imposed sanctions on Cameroonian timber adding that ‘‘the UK government also regards timber from Cameroon as “high risk” and has recently investigated UK operators trading in Cameroon timber.’‘

Greenpeace said it sees the action of the UK government and the sanction from the Dutch Authorities are positive first steps. But further tasked other EU countries to regard Cameroonian timber as high risk and to strictly police imports from the country until the government commits to seriously enforcing its forestry laws and regulations.

Greenpeace explains that, “Cameroon’s forests support the livelihoods of thousands of people and are amongst the region’s most biologically diverse forests, providing valuable habitat for endangered Western Lowland Gorillas, chimpanzees and forest elephants, amongst other species. Unsustainable and illegal logging in these forests is leading to deforestation, destruction of the ecosystem and diminished resilience to climate change.”

Greenpeace is an an independent global campaigning organisation acting to change attitudes and behaviour, to protect the environment and promote peace.