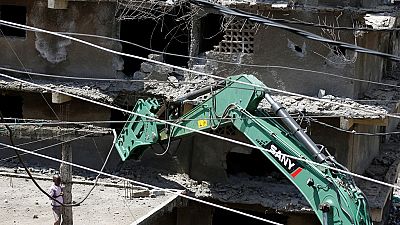 Authorities in the Kenyan capital on Tuesday pulled down a residential block in a poor district of the capital said to have been badly built.

The block was one of more than 250 shoddy buildings earmarked for demolition after the collapse of a six-storey building at Huruma, a Nairobi neighbourhood last month, which killed at least 51 people.

Since the Huruma tragedy which happened after days of heavy rains, city authorities have identified 258 buildings considered structurally weak hence marked for demolition.

If a building is of questionable structural integrity, we have two things to do. First, if it is salvageable, if it can be reinforced or remedied, it can be done.

Thousands of people will have to find new homes or be rendered homeless as a result of the exercise in a city already struggling with a growing population.

Some residents whose buildings have been marked for demolition have started parking their belongings although they say they have nowhere to go.

People living near the buildings that are set to be demolished advised stay away from the area. #HurumaDemolitions pic.twitter.com/o80cfcoBi5

The Secretary of the Building Inspectorate, Moses Nyakiongora said: “If a building is of questionable structural integrity, we have two things to do. First, if it is salvageable, if it can be reinforced or remedied, it can be done. If it is completely un-salvageable like this one where engineers have confirmed that it is completely unsafe and there is nothing you can do to make it safer …necessary orders have been given to the owner to bring it down”.

Officials say demolitions have been delayed or prevented in the past due to lengthy legal tussles by owners or interventions from local politicians.

But city authorities are taking the issue of illegally cited buildings seriously this time around.

“For a developer to get building plans approved, they would have to certify that they own the land and that would mean they present a title deed from the lands commission” explained Christopher Khaemba, the Nairobi County Secretary for Urban planning.

He however noted that “many of these buildings are on lands that have no title deed, so they were clear that they would not receive approvals for their plans so they went ahead and just put up their buildings.”

The six-storey which collapsed in the Huruma neighbourhood according to Kenyan authorities had been condemned before it crumbled but said it was not clear why it had not been pulled down.

Dozens of survivors from that disaster are keeping up at a local authority hall as they look for new homes.

“There are others who are now living out in the cold,” he added.

Finding new homes now will be a daunting task as city authorities are auditing structure.

The country’s Housing Minister on May 5 said of the more than 2,600 buildings examined, 226 were found to be “structurally suspect” and needing immediate tests. But the number is said to have since last week risen to 258.