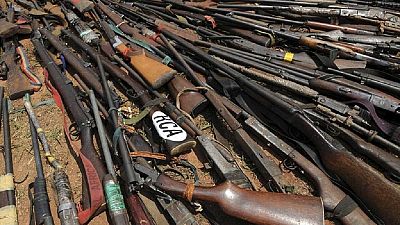 A confidential report to the United Nations Security Council indicates that several Congolese officers said North Korea supplied troops and police with pistols and sent 30 instructors to provide training for the presidential guard and special forces.

A U.N. arms embargo on North Korea prevents it from importing or exporting weapons and training.

An arms embargo on the Democratic Republic of Congo requires states to notify the Security Council sanctions committee of any arms sales or training.

The group also found that the same type of pistols was available for sale on the black market in Kinshasa.

The experts said they found that several Congolese army officers, as well as several police deployed abroad in a U.N. mission, appeared to have North Korean pistols.

The Congolese officers said the pistols were delivered by North Korea in early 2014. “The group also found that the same type of pistols was available for sale on the black market in Kinshasa,” the report said.

The experts said they had asked North Korea and Congo for information but had not yet received a response.

The findings contradict suggestions from Western officials who said any Rwandan support for Burundian rebels appeared to have ceased last year.

The United States said it had raised concerns with Rwanda over reports it was meddling in Burundi. Political violence has simmered in Burundi for a year after Nkurunziza pursued and won a third term.

The crisis has sparked concerns it could spiral into an ethnic conflict in a region where memories of neighboring Rwanda’s 1994 genocide are fresh.

The Security Council sanctions committee is to discuss the report today.