The permanent representatives of the Arab League held a meeting in Cairo on Wednesday to discuss the situation in Aleppo, Syria’s second city, where more than 270 people have been killed since hostilities resumed on 22 April.

The fighting is “the most violent in Aleppo for more than a year,” said the director of the Syrian Observatory for Human Rights (SOHR), Rami Abdel Rahman.

I do not think the strikes will stop, because the decision to stop is not in the hands of (President Bashar al-Assad,) but in those of his Russian ally.

The clashes continued overnight with exchanges of artillery fire and air strikes, according to an AFP correspondent.

They calmed down a bit on Wednesday morning, but people did not expect a long respite.

“I do not think the strikes will stop, because the decision to stop is not in the hands of (President Bashar al-) Assad, but in those of its Russian ally,” said Mahmoud Sendeh, a 26 year old activist that lives in a neighborhood which is controlled by the rebels.

Fighting flared in Aleppo after a coalition of rebel groups, “Fatah Halab” (the conquest of Aleppo) launched an offensive on the western neighborhoods controlled by the regime.

Three civilians were killed Wednesday when a rocket landed on a government district, the official SANA news agency reported.

Since 2012, the second city of Syria has been divided by parties controlled by the regime and those in the hands of rebels. Rebel groups largely hold areas in the west while regime forces nearly encircle rebel neighborhoods to the east.

US chief diplomat John Kerry threatened Assad with “consequences” if Damascus did not meet the new ceasefire being discussed between Washington and Moscow.

Russia also added its voice on Tuesday and said it hopes for a ceasefire “in the coming hours.” A new round of UN-backed peace talks is set to start on May 10 in Geneva. 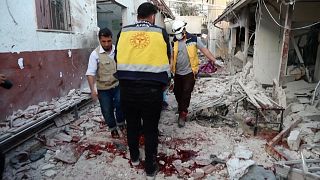