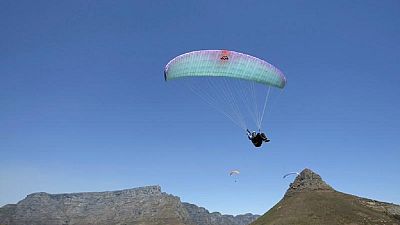 A paragliding school in Cairo is taking people to new heights.

Under the guidance of paragliding instructor Esmat Mohamed, thrill seekers have the opportunity to see the Egyptian capital from a different perspective.

Mohamed, who was once an amateur skydiver, quit his job to follow a passion for paragliding three years ago in 2013.

“It started as a hobby. I was going through my career and I had no relation to aerial sports (but) afterwards I decided to quit my career and start something that I love,” Mohamed said.

Speaking to Reuters, he explained the technicality of paragliding citing balance as the core mandate in controlling oneself.

“You need to check that there are no problems with the wing, (that) the ropes are untangled. Afterwards you want to raise the wing in a proper way where the left side and the right side of the wing are equal. You then start running towards the edge with the wind at a 90 degree angle and you start handling the wing. The most important part is that the wing does not fall. For example if the wing goes to the right you go to the right and if it goes to the left you go to the left using a certain technique where you control yourself below the centre of the wing.”

The sport requires certain conditions in order for beginners to stand half a chance of flying, such as 15km/h wind speed and a moderately high terrain. Despite its technicality, many have gone miles of success.

“There are people who continue abroad afterwards where they start taking paragliding and paramotor courses. One man travelled to Spain and Italy and now he is doing paramotoring. Another one got a paramotor and wings in Egypt and is living his life. There are many people who do this,” said Esmat.

The 5-day course costs $168 and the school is seeing a surge in interest thanks in part to Egypt’s ability to combine middle eastern charm with thrilling modern sport.

Paragliding is increasingly becoming a popular sport in parts of Africa that have conducive conditions that favors the aerial sport.