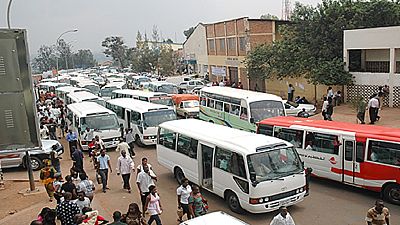 The Rwanda company behind the country’s cashless bus payment system, Tap & Go is looking to expand its franchise.

The system allows commuters to electronically pay for their bus fares through mobile money or point of sale devices operated by vendors at bus terminals.

Barely 6 months after its launch, the company’s founder says they have received demands from other countries to introduce the system there.

“Some countries have already started showing interest in having our solution there. So very soon when we’ve properly mastered and have it working very well in Rwanda, we’re going to export it as a product that started in Rwanda but to other countries,” Patrick Buchana said, adding that “the appetite is there so we’re soon going there”.

Tap & Go was developed by the AC Group, a start-up technology firm in Rwanda’s capital, Kigali and launched in December 2015.

For Patrick Buchana and his team at AC Group, birthing the idea was not so difficult because “Rwanda has an organised transport system but then again, there were many challenges that the system had that we had to bring a solution to”.

“The thought came about because there were very many challenges and it had to be developed by Rwandans because first we understand the market,” he told Africanews.

“So looking at the problems that they had it was a solution that transport operators needed but also government needed it because they need statistics that are abreast with what’s happening on the ground,” Buchana added.

The government of the east African country is working towards becoming the continent’s first cashless society – and the success so far of this system keeps the government’s dream alive.

The service, which is currently being piloted in the Rwandan capital, Kigali, aims to completely automate the public transport sector.

Commuters simply need to recharge their smart cards either with a POS or via their mobile money account.

When boarding the bus, they tap the card on the machine which not only deducts the fare for the route but also shows the card holder his or her account balance.

So far, passengers who use the Tap & Go service are content with the experience. But there are a few things passengers like Speciose Mukandoli would want to see addressed.

“There are some passengers who would want to use it (bus) for shorter commutes and at reduced rates. But with the current card system that is not possible especially because the price is fixed. I find that to be really annoying,” she told Africanews.

The inventors of the technology say they are still fine tuning it and expect it to be full proof by June.

Buchana assures, “we have kept on improving it till the solution that we have today. It’s a solution that’s tailor-made for Rwanda. It’s working. clients are enjoying it and we hope to have a cut off of cash in the near future, probably end of June”.