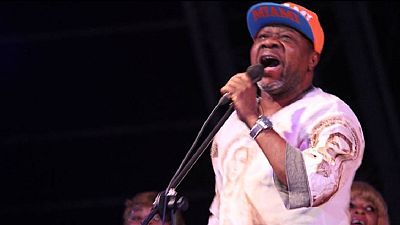 Papa Wemba, the acclaimed king of Congolese rumba music is dead, but the ‘vibes’ after his death continues to roll on in the midst of the emotions, pain and astonishment. Interrogation scrolls on social networks, including Facebook and Twitter.

While some fans see in Papa Wemba’s death ‘‘completion of a rich artistic work,’‘ others are questioning several videos shot while Papa Wemba was on stage in the lead up to his death.

In a video of March 10, 2016 posted on Telesud, when Wemba was asked about his artistic future and the end of his career he replied: ‘‘Now when I’m on stage, I feel I’m hovering, maybe that is how I will go (die) one day before,’‘ he said.

Papa Wemba knew how he was going to die.

‘‘As a premonition Papa Wemba knew how he was going to die,’‘ wrote one user.

Why the late arrival of medical assistance?

Many social media users are also questioning how long it took for medical assistance to arrive on stage after the music icon slumped on staage during a performance at the FEMUA music festival in Abidjan.

They question why Papa Wemba after the fall on stage was immediately surrounded by his dancers (who wre seen trying to fan him with their clothes).

For some, this “slowness in action” and lack of “qualified medical staff on site” were the basis of the artist’s death. However, other sources report that he was already dead before his fall.’‘