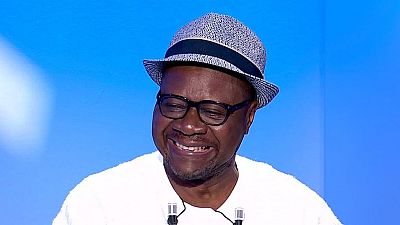 While the remains of Papa Wemba, ‘‘the father of the Congolese Rumba,’‘ lies in Ivosep morgue in Abidjan where he died on Sunday (April 25) whiles performing on stage at the FEMUA music festival, tributes to this African music icon flooded social networks.

People from different walks of life, those in the arts (music) fraternity, politicians, sports personalities, media people and a host others paid glowing tribute to Wemba as a fine artist whose paid his dues to music on the continent and globally.

Present in Abidjan for its live radio broadcasts on RFI, the host star, Claudy Siar, is certain that Papa wemba has “taken off to the stars.”

It's a catastrophe. Congolese music has been decimated, it's been blown apart. I don't know what to say. I refused to believe it when the Ivory Coast government official told me. To be honest, from now on, life means nothing, we are nothing.

For his part, Salif Traoré of the Magic System Group and organizer of Urban Music Festival Anoumabo (FEMUA), said the “pain is deep”: “It is with deep sadness that the General Commission of FEMUA announce the passing Congolese artist Papa Wemba, occurred following a seizure on stage at the Urban Music Festival Anoumabo on the night of 23 to 24 April 2016, the Commissioner General extends his condolences to the family and the world of culture. Further information will be communicated shortly. “He wrote on his Facebook page

Hamed Bakayoko, Minister of the Interior of Côte d’Ivoire, testified in a tweet that ‘’ Africa lost one of its most beautiful voice.’‘

The Cameroonian artist Manu Dibango, renowned trumpeter, without detour says, in an interview with the BBC that ‘’ Papa Wemba was the voice of Africa.’‘

Singer Angelique Kidjo would not be left out as she tweeted in praise of Wemba with whom she did a duet on a Manu Dibango track. She further dedicated her performance in the United States to Wemba and American pop icon, Prince.

https://t.co/t64IG7FPoX Remembering #PapaWemba with our duet on Manu Dibango's “Ami Oh”.
He had a voice of an angel.

Papa wemba one africa biggest artist. Rest in peace. He stood For an africa united. One love pic.twitter.com/IN4nI4zRID

Fellow Congolese artiste Koffi olomide described the passing of Wemba as a ‘‘catastrophe’‘ in a video posted on his facebook wall.

‘‘It’s a catastrophe. Congolese music has been decimated, it’s been blown apart. I don’t know what to say. I refused to believe it when the Ivory Coast government official told me. To be honest, from now on, life means nothing, we are nothing. Today, with God’s forgiveness, I want to ask Him to accept Papa Wemba. He is His son,’‘ he said.

Meanwhile, many fans across the world say they are ‘’ saddened ‘’ and do not understand what really happened to ‘’ their artist.” While waiting for the light be shed on the real circumstances of his death, they continue to mourn their star.

Papa Wemba!Tribute to a shining ICON – R.I.P to another Musical Legend! One of the Best African singers in history! pic.twitter.com/NvvwyFM1jj

What a great artist!!!! RIP #PapaWemba you have blessed us with your talent and you will forever be in our minds. pic.twitter.com/KYuKv76Jes

1/ I'll always associate the name of Papa Wemba with the French word “liesse,” or jubilation. I heard him for 1st time in the '80s.