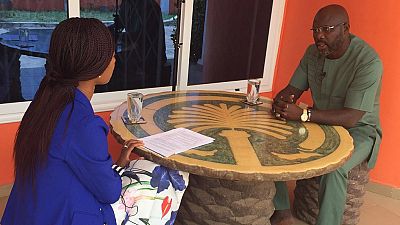 Celebrated African footballer George Oppong Weah has revealed exclusively to Africanews that he will run for the Liberian presidency for a second time.

At his residence in the Ghanaian capital, Accra, where Weah spoke in an exclusive interview with Africanews’ Juliet Bawuah, he indicated his preparedness to attempt a second go at the highest office in Liberia.

“…I will be declaring on the 28th of April and our people are gearing up; I want to participate in the process,” he said.

Despite being leader of the Congress for Democratic Change, which he formed some eleven years ago, Weah tells Africanews he is willing to subject himself to party scrutiny and structures.

Eventually, he hopes to be given the nod.

“…We have party norms; we are going to go to convention and I know I will be the candidate on the ticket of the Congress for Democratic Change,” Weah was hopeful.

The motivation to run again, he tells us, is informed by an unquenchable desire to let the world know how much of a fine gentleman and nation builder he is. Part of that drive, he adds, is aided by how well he’s done for himself as well as the contribution he’s offered to the continent.

“The world must be aware that I am a good person.

“I can form cooperation and collaborations for my people to work and I am ready to work. I have done so much for Africa and I think in the governance process I can bring more on the table,” said the only African player to win FIFA’s World Player of the Year award.

When passed okay to run, Weah must work more than the usual to cruise his way to victory.

His second attempt comes eleven years after disputed election results saw him lose to sitting president Ellen Johnson Sirleaf, and also five years after he failed in his bid as vice presidential candidate of the CDC running alongside Winston Tubman.

Nonetheless, he is excitedly hopeful he is going to be made Head of State.

Like many of his supporters, he treats the assertion that he lost the 2005 polls with understandable contempt.

But that consistent contention of the 2005 polls may have to cease at a point as he has some convincing to do at home and abroad that he is ready to capture power.

He hasn’t had it smooth-sailing in recent days either

This week, a report by the respected Institute for Research and Democratic Empowerment in Liberia, mentioned Weah and one other for poor showing in the West African country’s senate.

The report focused also on their participation in legislative debates considered prime responsibility for all senators.

Weah was elected senator on December 20, 2014. His term has so far received mixed reviews. Some say that’s where he belongs. His supporters insist it is a huge step towards the presidency.