Libyan authorities on Sunday arrested 203 African migrants in the capital who were preparing to make a perilous sea crossing to Europe.

The migrants were planning to board unworthy sea boats to cross the Mediterranean, with hopes of moving on from Libya to Italy and the European Union (EU).

The migrants were nabbed after a raid by forces battling clandestine migration targeted a house in eastern Tripoli’s district of Al-Hashan district.

“After a tip-off about a people smuggler preparing a crossing to Europe by clandestine migrants the raids were carried out in a Tripoli suburb,” a security official said.

“We arrested 203 illegal migrants from different nationalities. They were with there with their smuggler,” he said.

The International Organisation for Migration says almost 6,000 refugees and migrants have sailed from Libya to Italy – some 300 kilometres (185 miles) away across the Mediterranean – in the recent days.

Photos: In the last four days, 6,000 migrants have arrived to Sicily by boat from Libya https://t.co/5QPjcWhWKN

The shorter, relatively safer route via Greece has been blocked following the deal signed between Turkey and the EU.

In a recent visit to Tripoli, the French and German foreign ministers offered support to Libya in its attempts to control the flow of migrants. 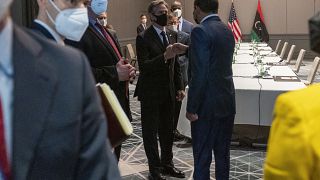