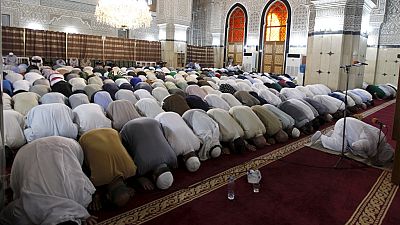 The war against the the Islamic State insurgents, or known as ISIL, is also a war against its beliefs.

And it starts inside the mosques, where some clerics have spread ISIL’s violent interpretation of Islam that speaks to jihadists from all around the world.

In Iraq’s northern Kurdish region, authorities are betting on what they call enlightenment to stop ISIL from spreading its views.

Through Friday preaches we now try, with the help of enlightened imams, to make our people understand the tolerance of Islam, and to reject extremism.

Here some preachers and imams have been banned from giving Friday sermons, after they expressed solidarity with ISIL and the terror attacks the group has claimed.

It appeared some of these preachers’ sermons were in fact convincing many young men in the region to join ISIL, also known as Daesh.

Imam Barzan Rasheed explains: “We now focus Friday sermons on fighting extremist ideology and on trying to get different religions and nationalities to coexist, and also to bring love, peace and maintain internal security. We face a big responsibility: to fight these extreme new thoughts within our mosques.”

According to the Kurdish Ministry of Religious Endowments, more than 5 percent of Friday sermons spread religious messages taken out of context.

The decision to ban some imams from giving sermons came after some supporters of ISIL were arrested and told authorities that these sermons had pushed them towards extremism.

The ministry also decided to seize entire stacks of religious books from mosques, on the grounds they promoted fundamentalist and extremist views.

“Through Friday preaches we now try, with the help of enlightened imams, to make our people understand the tolerance of Islam, and to reject extremism. The Islamic scholars here also visited the local prisons that hold many ISIL militants, to try to change the minds of these lost youths and to bring them back onto the right track,” said Mariwan Naqshbandi, a spokesman for the ministry.

This ideological war is also fought in Kurdish schools, where some books and religious readings have been replaced with more modern and open-minded ones.

Moderate teachers have been brought in, and fundamentalists kicked out.

The goal is to get the next generation to grow up with a peaceful understanding of Islam — and not the slightest appeal for ISIL’s ideology.