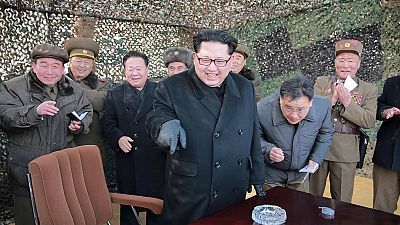 He is no stranger to bellicose rhetoric.

But Kim Jong Un’s latest orders for North Korea to be ready to use its nuclear weapons at any time, putting the military in ‘pre-emptive attack’ mode, have sent shockwaves around the world.

His comments, made amid exercises involving new multiple rocket launchers according to state TV, sparked particular concern over the border in South Korea.

Attending a military ceremony there, the President was resolute.

“If we don’t stop North Korea, its nuclear capabilities will continue to be heightened, which will bring an irreversible disaster to the future of our people and demolish the basis of peace and order in northeast Asia.”

Moscow also expressed concern. But Russia and the North’s main ally China, are unhappy about the formal opening of talks between Washington and Seoul on the possible deployment of a US missile defence system in South Korea in response to the North’s growing belligerence.

The latest tension on the peninsula follows tough new UN sanctions on North Korea following its nuclear test in January, and last month’s satellite launch, which critics said was really a test of ballistic missile technology.

The EU has also extended its sanctions against Pyongyang, in line with the UN.