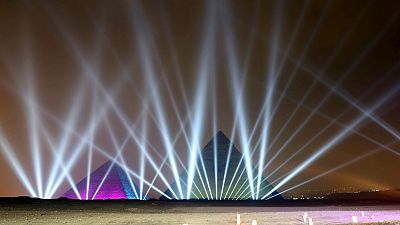 Egypt celebrated the transition into the new year with music and light show followed by fireworks above the Giza Pyramids .

All over the world, millions of people welcomed the New Year with by trying to ignore the threats of attacks, while the festivities were placed under high security.

In Dubai, fire broke out in a five-star hotel, the Address Downtown, located in a skyscraper of 63 floors and not far from the highest tower in the world, Burj Khalifa (828 meters). but the gigantic and spectacular fireworks went heard as planned.

In Europe, a maximum of precautions had been taken to address the risk of attack, and the festivities were even canceled altogether in Brussels, where six more people were arrested Thursday in the wake of threats of imminent attacks . Three of them were released after their hearing.

In Paris, still recovering from November 13 attack that left 130 dead, and 350 injured, celebrated the New year under high security. But without the traditional fireworks at th Champs-Elysées. According to authorities, e the risk of terrorism remains “very high” . The deployment of more than 100,000 police and gendarmes was planned across France.

However, in the UK, the fear of terrorist attacks did not stop the London Eye in the British capital to be ablaze at midnight in front of thousands of people gathered on the banks of the Thames. Some 3,000 police deployed in the city.

In Hong Kong, tens of thousands of people gathered on both sides of the iconic Victoria Harbour to watch a magnificent fireworks display.

Sydney was the place to be on New Years eve with the stunning and breathtaking fireworks displayed at the Harbour bridge, more than a million people are expected to have participated in the annual even