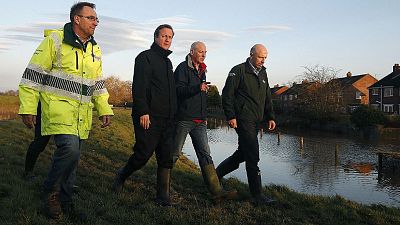 Cameron announced this when he visited the flood-hit historic city of York on Monday as cities, towns and villages across northern England battled to get back on their feet following devastating storms.

“After his visit, Cameron wrote on Twitter that Yorkshire would get more of the protection needed to deal with floods”: http://news.yahoo.com/pm-cameron-visits-flood-hit-english-city-york-000430479.html

Meanwhile, hundreds of soldiers have been deployed to evacuate residents and help emergency services.

However, local authorities said around 500 properties were flooded in York, one of Britain’s top tourist attractions. 2,000 homes and 400 businesses in Leeds were also affected.

Cameron said the government had spent £100 million ($149 million) in the past five years in the county of Yorkshire and is planning to spend three times as much in response to the current flooding.

He added that he will review spending on flood defences after considering some of the worst flooding in the UK for 70 years.

“We’re spending more in this parliament than the last one and in the last parliament we spent more than the one before that. But of course after any of these events, we should look at what we’re planning to build, what we’re planning to spend and think well, do we need to do more? We’re going to be spending £2.3 billion on flood defenses in this parliament but we’ll look carefully at what’s happened here and see what more can be done,” he said.

The UK Environment Agency had issued a 63 severe flood warnings in northeast and northwest of England on Monday, signalling a “danger to life”, chiefly at points along major rivers in Yorkshire.

There were also another 170 flood warning or alerts in place, meaning flooding was either expected or possible.

More rain is forecast later in the week raising the prospect of further floods at a time when many people are still at home for the Christmas celebrations.