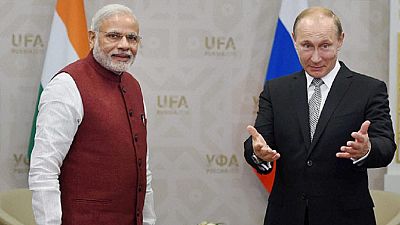 Indian officials signed a series of deals on Thursday with their Russian counterparts for their nuclear reactors and military helicopters.

According to Mr Putin, the agreement has been reached on India providing one more site for construction of Russian-designed power generating units VVR1200 (Water-water nuclear power reactor) in which the most modern and safe technologies were used.

“These are practical steps aimed at fulfilling the most important document signed a year ago – “Strategic vision of partnership in using nuclear energy.” said Putin in a statement following the signing.

The site for the construction of Russian six nuclear reactors of 1,200 megawatts (MW) each, was allocated in the southern state of Andhra Pradesh. That is in addition to the six Russia is constructing in neighbouring Tamil Nadu state.

Moscow has in the recent years slipped behind the United States and Israel in securing orders in the Indian defence market estimated to be worth $130 billion over the next seven years.

While U.S. firm General Electric and Westinghouse, a U.S.-based unit of Japan’s Toshiba , are still weighing an entry into India’s nuclear energy sector because of a law that makes reactor suppliers liable in case of an accident, Russia will be New Delhi’s closest ally.

“Our countries traditionally closely cooperate in military and military-technical spheres. I am talking not only about supplies of ready to use products, but about technological cooperation as well,” Putin said.

During the meeting PM Modi said that their relationship truly meets the taste of special and privileged strategy partnership.

“ We have laid the foundation of the future character of this strategic partnership. The intergovernmental agreement on manufacturing of Kamov 226 helicopters in India is the first project for a major defence platform under “The Make-in-India” mission, it is rightly with our most important defence partner,” he said.

The helicopter deal is the first major contract under Modi’s push to build weapons in India that has excited local defence companies but failed to deliver any significant tenders.