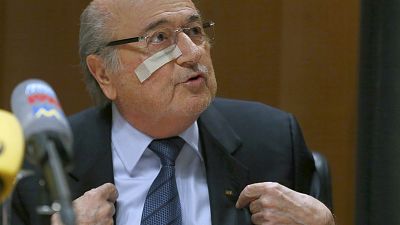 Sepp Blatter has confirmed he will appeal to the Court of Arbitration for Sport after he was banned from football for eight years.

Blatter held a news conference in Zurich shortly after FIFA’s ethics committee announced he, and UEFA president Michel Platini, had been banned from all football-related activity for eight years.

“I will fight – fight for me, and I will fight for FIFA. Suspended eight years for what?” Blatter said, adding his anger that the media had known of his ban before him on Monday morning.

“I spoke with my lawyer this morning, who was definitely not surprised that the notification of the decision was first made to the media, and later to those who should receive it.

He is not surprised, because communication in this ethics committee is an example of how you should not do it.”

The 79-year-old was punished for giving Platini over 2 million dollars in February 2011 for work the Frenchman had undertaken between 1998-2002 as a FIFA presidential adviser.

Blatter said he had a gentleman’s agreement with Platini and continued to insist he has done nothing wrong.

“I am a man of principles and these principles are, and I still go on, that never take money you have no earned. Secondly, pay your debts. But now they are telling me that I tried to buy, through Michel Platini, votes for the 2011 elections,” concluded Blatter.

The ethics inquiry began in the wake of the Swiss attorney general’s decision to open criminal proceedings against Blatter over the payment to Platini.

The office is also investigating FIFA’s award of the 2018 and 2022 World Cup finals to Russia and Qatar.

In the United States, prosecutors have indicted 27 current or former soccer officials, including eight former FIFA executive committee members and the current heads of both the North and South American federations, over allegations that they ran bribery schemes connected to the sale of television rights for soccer competitions.

Twelve people and two sports marketing companies have been convicted.