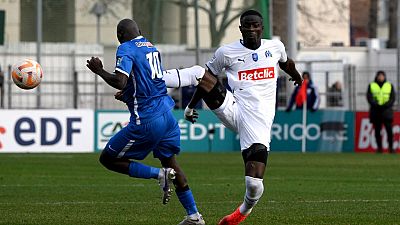 The Ivorian international of OM Eric Bailly, excluded in early January in the Coupe de France against Hyères, was suspended for seven matches by the disciplinary committee of the French football federation, a decision which OM said to reserve "the right to appeal" .

Bailly has already served two of these seven suspension matches , against Troyes and Lorient in the league. He will also miss the 1/16th final of the Coupe de France scheduled for Friday against Rennes as well as the Ligue 1 matches against Monaco , Nantes and Nice .

His last game of suspension will be either a possible 1/8th final of the Coupe de France on February 8, or the league match against Clermont on February 12.

Bailly was sent off after a quarter of an hour against fans from Hyères (N2) after a gross foul on Var midfielder Almike Moussa N'Diaye , whom he hit with his foot in the chest.

Evacuated on a stretcher, N'Diaye had to be hospitalized and briefly went through the intensive care unit of the Hôpital Nord de Marseille. OM finally won 2-0 in this match played at the Francis-Turcan stadium in Martigues.

In addition to the possibility of appealing, OM mentioned in a press release published Thursday evening "the difference in the application of the reference penalty scale by the disciplinary committees of the FFF and the LFP, while these two bodies have an impact on the same competition, in this case, Ligue 1".

“Olympique de Marseille is firmly convinced that a standardization of the sanction criteria impacting the same competition is necessary to guarantee sporting fairness,” added the club.

A little earlier, at a press conference, Marseille coach Igor Tudor had for his part judged the sanction "a little exaggerated". "We have to accept it. We have resources in his position and he has already served two matches, it will already be the third tomorrow," he said.

"I know how Eric is and he never intended to hurt. The most important thing is that our colleague from Hyères is fine and has been released from the hospital," said Marseille defender Leonardo Balerdi.

For massive lighting of smoke bombs during the same match against Hyères, OM was also fined 10,000 euros and a match suspended from the closure of their visitors' area outside in French Cup.