Burkina Faso's coup leader, Captain Ibrahim Traoré, will convene a so-called "national assembly” on October 14 and 15 to appoint a transition charter and most likely a new "transitional president".

The announcement came Saturday after a decree was read on state television.

The assembly talks are set to take place in Ouagadougou, it is on that occasion that the "Transitional Charter" which will set out the steps to be taken by the country towards the convocation of elections, will be ratified. According to local radio station Omega, the meeting will gather actors including civil society organizations and political personnalities.

Jihadist militants have killed thousands and forced 2 million to flee their homes since 2015.

Despite military operations, attacks increased since mid-March and continue to plunge many families into mourning.

"Terrorism is making things difficult for the Burkinabe people", the uncle of a slain soldiers laments.

"We are with the new president and we pray that God assists him and also, we're looking for equipment and personnel so that we get out of this. If not, a lot of our children will die", Moumouni Zoundi alerts.

He was on one of the tourners attending Saturday the funeral of 27 soldiers who were slain in an ambush on September 26. Captain Ibrahim Traoré also attended the funeral.

The 27 soldiers were part of a supply convoy of more than 200 trucks heading to the town of Djibo, capital of the northern Sahel region, when they were attacked.

In addition to them, at least 10 civilians died, others are still unnacounted for.

The al Qaeda terrorist group claimed responsability for the attack. This military setback is seen as the catalyst for the 2nd coup.

Shortly after ascending to power, Junta leader Traoré argued soldiers lacked the basic logistics under his predecessor Damiba. It remains to be seen if he can turn around the crisis. 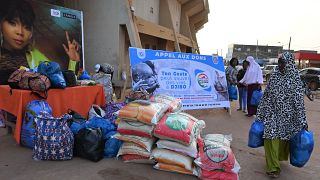