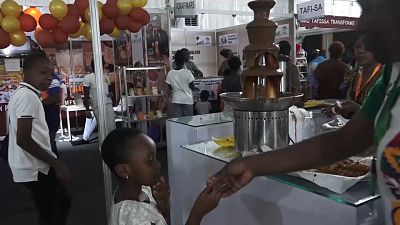 The transformation of Cote d’Ivoire’s cocoa industry was the focus of the 8th edition of the National Cocoa and Chocolate Day which took place in Abidjan this weekend under the theme, ‘Local cocoa processing: opportunities for chocolate artisans’.

With more than 2 million tonnes produced per year, Ivoirian cocoa beans are estimated to account for 45 per cent of world production, generating 40 per cent of the country’s export earnings, and accounting for 15 per cent of national GDP.

But while it is a global leader in milling, Cote d’Ivoire wants to capture more of the added value added and jobs associated with the sector so that farmers can earn more.

‘We are at about 600,000 tonnes in the first phase of cocoa processing, what we call grinding or milling, but we must manage to make finished products that are consumable by the population,’ says Sonore Konan Kouassi, president of the fair’s organising committee.

This was one of the main themes of panel discussions at the event, and the conclusion was that the consumer market does exist.

‘Our short-term project is to increase the processing capacity. Today, we are up to 500 tonnes of products that we can put on the market, but after that we intend to multiply by 4 or 10,’ she says.

Increase in earnings for farmers

There was some good for planters at the fair with the announcement of a guaranteed increase in remuneration for their beans for the 2022 to 2023 season, from last year’s $1.24 to $1.35.

‘Thanks to the state which has made efforts, but we still tell them to continue because we need to be more autonomous,’ says cocoa farmer Sawadogo Moussa.

While this year’s harvest has been good, a recent World Bank report found that while cocoa plays a central role in the lives of many Ivorian families, more than half of producers live below the poverty line.

While cocoa is a pillar of the local economy, it is subject to the rules of the world market, and is facing increasing pressure to be able to certify the origin of its beans and that the cocoa is produced under ethical conditions.

And the industry is making efforts in this direction, with the development of a multifunctional producer's card, with a QR code that generates information about the farmer and their land, which includes a visa bank chip that allows them to carry out their commercial operations.

‘Want to trace the product, we want to know exactly which cocoa comes from which plantation in which region. The objective is to know who produces what, and who it passes through before being exported, so that we can reassure the final consumer that our cocoa is produced under ethical conditions,’ says Jérémie Kouassi, Director of Agricultural Development at the Coffee and Cocoa Council.

With the importance of cocoa to the Ivorian economy and society at large, the stakes are high for the industry to make sure it reaches its full potential as an engine of economic development.