Euronews: The death of Queen Elizabeth II has prompted a flood of condolences from around the world. African leaders have shared their memories of her frequent trips to the continent during her 70-year reign. But the monarch's death has also prompted frank conversations about the colonial past and English-speaking Africa. And with me now to talk about these reactions is Lauriane Vofo Kana, a journalist with our sister channel Africa News. It's a pleasure to have you with us today. We have heard from the likes of Nigerian President Muhammadu Buhari and the Kenyan President. They spoke of her as an icon and sent their condolences. But of course, there is a whole range of reactions. And we know that Africans have also had frank conversations about the tragedies of the colonial era. Tell us about these reactions

Lauriane: [Exactly, after the Queen's death on 8 September. We had a mixture of reactions. We have a lot of different emotions that have been expressed, from apathy to messages from African citizens and their leaders sending their deepest condolences; to others, expressing their anger about the colonial history with the past of the British monarchy. Because when Queen Elizabeth II ascended the throne, she inherited millions of subjects, many of whom did not want to be part of that empire.

Euronews: And so she was head of state during a period that went from decolonisation to the formation of the Commonwealth. How was this considered?

Lauriane: [Some Africans have praised the Queen for the transition from colonies ... to constitutional monarchies and then to republics. But what did also happen during this period was that the Queen oversaw the last days of the British Empire. And, for example, in Kenya in the late 1950s, a revolt was brutally and violently suppressed by British colonial forces. And in 2013, the survivors of that Mau Mau revolt received compensation from the British government, her Majesty's government. This shows how important it was that these people acknowledge the crimes of the past.

Euronews: Indeed. Apart from her role as monarch, she was also the head of the Anglican Church. Was this role important for people of faith?

Lauriane: Indeed, she held the title of "Defender of the Faith" and for the African Anglicans I'm thinking of. They will also remember, they will always remember her Easter and Christmas messages because they gave them hope and allowed them to walk in faith. She was a role model, someone who was not ashamed of her faith, it was something that helped her and transformed her life, helped her to love and serve the people around her. 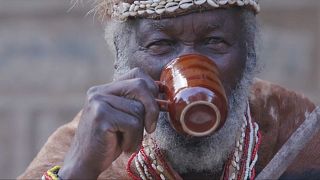