Lavish villas, luxury townhouses, high-tech offices, landscaped gardens, and a 15-storey commercial tower. These aren't the plans for the latest building development in Dubai but for a city in the suburbs of Harare, the capital of Zimbabwe.

Despite having one of the world's highest unemployment and inflation rates, a debilitating currency crisis, and falling foreign direct investment, the project is going ahead.

Zimbabwe and investors believe in its potential.

"This Cybercity is to be a key feature that will bring added value to our new city here. The development around the year for the smart city on 15,500 acres will be the smartest city in our region," says Emmerson Mnangagwa, president of Zimbabwe.

The futuristic Cybercity is projected to anchor what authorities view as the new capital city or the New Harare in the Mount Hampden area, 26 kilometers northwest of Harare.

"We've been trying to bring the Dubai standard of living to this particular development. The project will have high-end villas, we call them Zim Hills, surrounding water bodies. We will have a very tall tower with the shopping center," says Shaji ul Mulk, Mulk International chairman.

The futuristic cyber city is set to give the planned new capital a modern commercial feel, say authorities and investors.

The project, covering 2.5 million square meters of land, will include 250 townhouses, more than 80 luxury villas, a number of apartment blocks, high-tech office facilities, a 15-storey commercial tower, and landscaped gardens – all within a gated community.

"The investment by the UAE (United Arab Emirates) investor in the Smart City Project is quite instrumental from the economic development point of view," says Batanai Matsika, head of research, Morgan & Co.

Foreign Direct Investment inflows declined to $194 million in 2020, from $745 million in 2018, before the onset of COVID-19, according to data from the UN Conference on Trade and Development.

Once complete, the new city is set to provide relief for shoppers and businesses, away from Harare's crowded CBD. 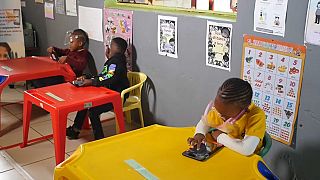